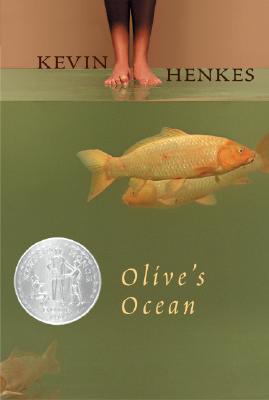 By Kevin Henkes
$8.99
Email or call for price

Sometimes life can change in an instant

Martha Boyle and Olive Barstow could have been friends, but they weren't. Weeks after a tragic accident, all that is left are eerie connections between the two girls, former classmates who both kept the same secret without knowing it. Now, even while on vacation at the ocean, Martha can't stop thinking about Olive. Things only get more complicated when Martha begins to like Jimmy Manning, a neighbor boy she used to despise. What is going on? Can life for Martha be the same ever again?

Kevin Henkes has been praised both as a writer and as an illustrator and is the recipient of the Children’s Literature Legacy Award for his lasting contribution to literature for children. He received the Caldecott Medal for Kitten’s First Full Moon; Caldecott Honors for Waiting and Owen; two Newbery Honors—one for Olive’s Ocean and one for The Year of Billy Miller—and Geisel Honors for Waiting and Penny and Her Marble. His other books include Sun Flower Lion, A Parade of Elephants, Chrysanthemum, and the beloved Lilly’s Purple Plastic Purse. Kevin Henkes lives with his family in a house in Madison, Wisconsin.

“Few girls will fail to recognize themselves in Martha.” — Kirkus Reviews (starred review)

“Henkes’s story is subtle and satisfyingly untidy. Grabs you right from the start.” — Voice of Youth Advocates (VOYA)

“With beautifully defined characters, events, and emotions that will tug at your heart, this novel is flawless.” — Daily Item