The Wedding of the Two-Headed Woman: A Novel (Paperback) 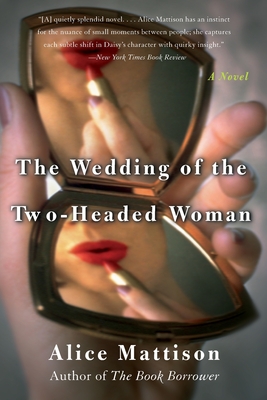 For years, following an early first marriage, Daisy Andalusia remained single and enjoyed the company of men on her own terms, making the most of her independent life. Now in her fifties, she has remarried and settled into a quieter life in New Haven, Connecticut. She's committed to a job she loves: organizing the clutter of other people's lives. Her business soon leads her to a Yale project studying murders in small cities. While her husband, an inner-city landlord, objects to her new interest, Daisy finds herself being drawn more and more into the project and closer to its director, Gordon Skeetling.

When Daisy discovers an old tabloid article with the headline "Two-Headed Woman Weds Two Men: Doc Says She's Twins," she offers it as the subject for her theater group's improvisational play. Over eight transformative months, this headline will take on an increasing significance as Daisy questions whether she can truly be a part of anything -- a two-headed woman, a friendship, a marriage -- while discovering more about herself than she wants to know.

Alice Mattison is the award-winning author of four story collections and five novels, including Nothing Is Quite Forgotten in Brooklyn. She teaches fiction in the graduate writing program at Bennington College in Vermont and lives in New Haven, Connecticut.