American on Purpose: The Improbable Adventures of an Unlikely Patriot (Paperback) 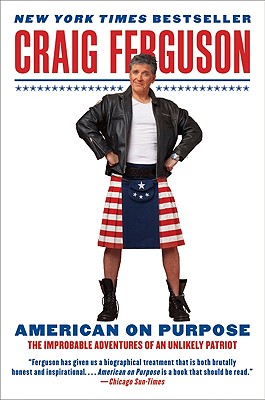 “With American on Purpose, Craig Ferguson somehow manages to avoid the pitfalls of self-indulgence and self-importance that plague most (okay, all) Hollywood autobiographies. He has, instead, written a book that is hilarious and irrepressibly daft, yet also kind, poignant, and undeniably wise. It was a joy to read.”  — Dennis Lehane, New York Times Bestselling author of The Given Day

Ferguson delivers a moving and achingly funny memoir of living the American dream as he journeys from the mean streets of Glasgow, Scotland, to the comedic promised land of Hollywood. Along the way he stumbles through several attempts to make his mark—as a punk rock musician, a construction worker, a bouncer, and, tragically, a modern dancer.

To numb the pain of failure, Ferguson found comfort in drugs and alcohol, addictions that eventually led to an aborted suicide attempt. (He forgot to do it when someone offered him a glass of sherry.) But his story has a happy ending: success on the hit sitcom The Drew Carey Show, and later as the host of CBS's Late Late Show. By far Ferguson's greatest triumph was his decision to become a U.S. citizen, a milestone he achieved in early 2008.

In American on Purpose, Craig Ferguson talks a red, white, and blue streak about everything our Founding Fathers feared.

Craig Ferguson is the host of The Late Late Show. He is the author of the novel Between the Bridge and the River and lives in Los Angeles, California.

“A fine writer, witty, reflective, and candid.... Ferguson is a kinetic cutup teeming with foolishness, brilliance, defiance, and heart. All this is captured in his book as an entertaining connect-the-dots journey.”
— Lisa Ko, author of The Leavers

“Funny and poignant and inspirational and brilliant. Nowhere in his story of emigration and redemption does Craig Ferguson realize that as lucky as he thinks he is to be ‘American on Purpose,’ we are luckier still to have him.”
— Keith Olbermann

“With American on Purpose, Craig Ferguson somehow manages to avoid the pitfalls of self-indulgence and self-importance that plague most (okay, all) Hollywood autobiographies. He has, instead, written a book that is hilarious and irrepressibly daft, yet also kind, poignant, and undeniably wise. It was a joy to read.”
— Dennis Lehane, author of The Given Day

“A great read . . . almost as good as my memoir.”
— Carrie Fisher, author of Wishful Drinking

“Ferguson has given us a biographical treatment that is both brutally honest and inspirational…American on Purpose is a book that should be read.”
— Chicago Sun-Times

“Hilarious and revealing...witty and emotional.”
— The Daily Beast