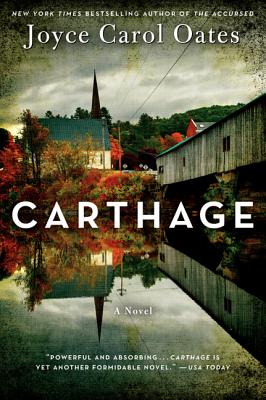 A young girl’s disappearance rocks a community and a family, in this stirring examination of grief, faith, justice, and the atrocities of war, the latest from literary legend Joyce Carol Oates

Zeno Mayfield’s daughter has disappeared into the night, gone missing in the wilds of the Adirondacks. But when the community of Carthage joins a father’s frantic search for the girl, they discover instead the unlikeliest of suspects—a decorated Iraq War veteran with close ties to the Mayfield family. As grisly evidence mounts against the troubled war hero, the family must wrestle with the possibility of having lost a daughter forever.

Carthage plunges us deep into the psyche of a wounded young Corporal, haunted by unspeakable acts of wartime aggression, while unraveling the story of a disaffected young girl whose exile from her family may have come long before her disappearance.

Dark and riveting, Carthage is a powerful addition to the Joyce Carol Oates canon, one that explores the human capacity for violence, love, and forgiveness, and asks if it’s ever truly possible to come home again.

Joyce Carol Oates is a recipient of the National Medal of Humanities, the National Book Critics Circle Ivan Sandrof Lifetime Achievement Award, the National Book Award, and the PEN/Malamud Award for Excellence in Short Fiction, and has been several times nominated for the Pulitzer Prize. She has written some of the most enduring fiction of our time, including the national bestsellers We Were the Mulvaneys, Blonde, which was nominated for the National Book Award, and the New York Times bestseller The Falls, which won the 2005 Prix Femina. Her most recent novel is A Book of American Martyrs. She is the Roger S. Berlind Distinguished Professor of the Humanities at Princeton University and has been a member of the American Academy of Arts and Letters since 1978.

Oates (The Accursed) returns with another novel that ratchets up the unsettling to her signature feverish pitch… Once again, Oates’s gift for exposing the frailty--and selfishness--of humans is on display.
— Publishers Weekly (starred review)

“After her lavishly imagined, supernatural historical novel, The Accursed (2013), Oates turns in the latest of her intensely magnified studies of a family in crisis and the agony of a misfit girl.”
— Booklist

“…Oates shows how perilous it is to assign guilt, and how hard it is to draw the line between victim and perpetrator in a blurred moral landscape in which every crime, on the battlefield or on the home front, is a crime of conscience.”
— New York Times Book Review

“For pages on end it is a compelling mediation on belief, betrayal, and grief. Oates has written a good book. I’d recommend it. What does it matter if it is or is not a war novel. The best war novels aren’t war novels at all. They become something bigger.”
— Daily Beast

“…brilliant…amazing…. A compassionate tenderness suffuses the final sections of the book, as palpable as the cold irony with which the book begins. It’s a breathtaking effect…”
— Washington Post

“Oates, working at the top of her formidable game, handily won over more of our readers with this raw, suspenseful, ‘real and immersive’ stream-of-consciousness tale.”
— Elle, Lettres 2014 Readers Prize

“Irresistible page-turner and heady intellectual experience… Oates continues to make her mark as one of the greatest American writers of our time.”
— Minneapolis Star Tribune

“Emphatically and artfully explores the subject of physical and emotional distances between loved ones, the various expanses between who individuals are, were, or could be, and the often barely perceptible gaps between guilt and innocence.”
— Philadelphia Inquirer