A Study in Scarlet (Hardcover) 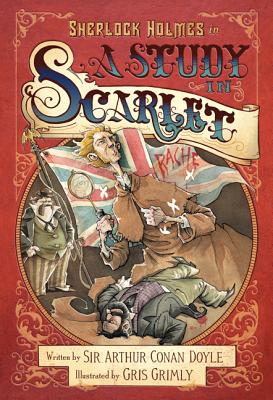 The year is 1881. The city, London. A man lies dead in an empty house, not a mark upon him, and no clues—save for the word "RACHE" scrawled in blood on the wall above. Elsewhere, two men—a former army doctor called John Watson and a brilliant eccentric called Sherlock Holmes—meet for the first time. These two events set in motion an adventure into the darkest corners of men's hearts as the cold, calculating investigative methods of Mr. Holmes are put to the test in a case that spans decades and continents, rife with danger and intrigue.

Originally published in 1887, A Study in Scarlet was the first novel to feature a character whose name would become synonymous with the art of deduction. Today it is completely reimagined with artwork by the modern master of gothic romanticism, Gris Grimly, bringing this thrilling tale of love and revenge to a new generation of readers.

Sir Arthur Conan Doyle was born in Edinburgh, Scotland, in 1859. Before starting his writing career, Doyle attended medical school, where he met the professor who would later inspire his most famous creation, Sherlock Holmes. A Study in Scarlet was Doyle's first novel; he would go on to write more than sixty stories featuring Sherlock Holmes. He died in England in 1930.