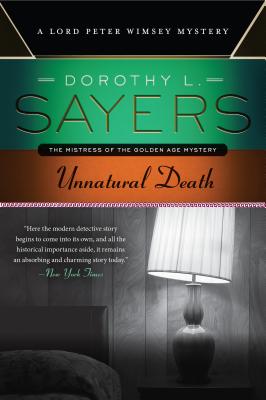 From Dorothy L. Sayers, the mistress of the Golden Age mystery, the third mystery featuring the dashing and brilliant Lord Peter Wimsey

The wealthy old woman died much sooner than the doctor expected. Did she suddenly succumb to illness—or was it murder? The debonair detective Lord Peter Wimsey begins to investigate, with the help of his trusted manservant, Bunter, and Miss Alexandra Katherine Climpson, a gossipy spinster with a gift for asking the right questions. The intricate trail leads from a beautiful Hampshire village to a fashionable London flat, where a deliberate test of amour, staged by the detective, will expose the elusive truth once and for all.

Dorothy L. Sayers was born in 1893. She was one of the first women to be awarded a degree by Oxford University, and later she became a copywriter at an ad agency. In 1923 she published her first novel featuring the aristocratic detective Lord Peter Wimsey, who became one of the world's most popular fictional heroes. She died in 1957.

“Dorothy Sayers is in a class by herself.” — Chicago Tribune

“The Wimsey books are literate and delightful mysteries.” — Chicago Tribune

“She brought to the detective novel originality, intelligence and wit. She gave it a new style and a new direction, and she did more than almost any other writer of her age to make the genre intellectually respectable.” — P.D. James

“One of the greatest mystery story writers of this century.” — Los Angeles Times