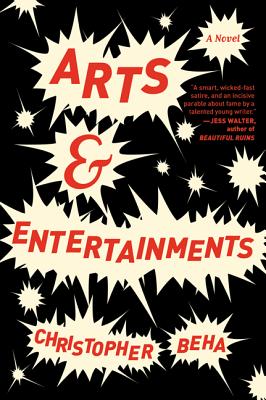 Christopher Beha delivers a cutting send-up of our cultural obsession with celebrity—a deliciously witty, and ultimately tender, novel about the absurdity of fame and the complexity of love sure to appeal to fans of Maria Semple and Jess Walter.

A sharp-edged satire with heart, Arts & Entertainments is the story of Handsome Eddie Hartley who, at thirty-three, has forgone dreams of an acting career for the reality of life as a drama teacher at a boys’ prep school. But when Eddie and his wife, Susan, discover they cannot have children, it is one disappointment too many.

Weighted down with debt, his wife’s mounting unhappiness, and his own deepening sense of failure, Eddie is confronted with an alluring solution when an old friend-turned-web-impresario suggests Eddie sell a sex tape he made with an ex-girlfriend, now a wildly popular television star. Overcoming his initial moral qualms, Eddie figures that in an era when any publicity is good publicity, the tape won’t cause any harm—a decision that will have disastrous consequences and propel him straight into the glaring spotlight he once thought he craved.

A hilariously biting and incisive take-down of our culture’s monstrous obsession with fame, Arts & Entertainments is also a poignant and humane portrait of a young man’s belated coming-of-age, the complications of love, and the surprising ways in which the most meaningful lives often turn out to be the ones we least expected to lead.

Christopher Beha is a deputy editor at Harper's magazine. His essays and reviews have appeared in the New York Times Book Review, the London Review of Books, The Believer, Bookforum, and elsewhere. He is the author of the novel What Happened to Sophie Wilder and the memoir The Whole Five Feet. A New York City native, he lives in Brooklyn with his wife.

“A funny novel about bad fame… [a] fast-moving satire by Christopher Beha about the semi-accidental creation of a contemporary two-bit celebrity: sex tape, social networks, and subsequent media circus.”
— —New York Magazine
“Arts and Entertainments is a 21st-century Faust written in the style of Muriel Spark.”
— —Books & Culture

“The ingenious way he plots to get back into his wife’s good graces provides lots of laughs in this very clever takedown of celebrity culture. Beha, deputy editor at Harper’s magazine, also gives his hapless hero plenty of heart in a novel that is both entertaining and thought provoking.”
— —Booklist

“A former actor’s sex tape rocks his world. Arts & Entertainments, by Christopher Beha, is a must”
— —Cosmopolitan

“...The storytelling is ingenious. Beha infuses the story with rich, potent irony, suggesting how susceptible we are to others’ plotting...Beha gets to have it both ways: His novel is at once brisk and episodic while critiquing the limits of brisk, episodic narrative.”
— —Kirkus Reviews

“I tore through Arts & Entertainments in a single evening, riveted by Beha’s satiric indictment of an appallingly recognizable celebrity culture...a deft, clever, and altogether too plausible novel, its last line delivering an unexpected punch that is entirely earned. Read it in an evening and see what I mean.”
— —Rebecca Mead, author of My Life in Middlemarch

“Arts and Entertainments is a sharp, hilarious look at what we’ve wrought, and Christopher Beha proves himself a truly gifted novelist. This book is smart and full of feeling and just rips along with narrative thrills. Read it, and then burn your sex tapes.”
— —Sam Lipsyte, New York Times Bestselling author of The Ask

“Beha captures in hilarious detail the many insidious ways we rush to cheapen our own identities, and how even as our sense of self veers out of our control, we still never stop trying for some deeper meaning. A funhouse dissection of our current frailties.”
— —Dana Spiotta, author of Stone Arabia

“Christopher Beha is one of the most talented young writers at work today.”
— —Jess Walter, author of Beautiful Ruins

“An utterly hilarious and believable tale of the flawed and messy vagaries of fame. It’s a wild and funny ride, one which I enjoyed heartily.”
— —Jami Attenberg, author of The Middlesteins

“...a moving, discomfiting and at times painful satire on our reality-TV culture that had me cackling in recognition and cowering in shame.”
— —Adam Ross, bestselling author of Mr. Peanut

“In this novel, being a star is like being trapped in a Kafka story. As Beha pushes Hartley through the bizarre mechanics of fame, he brings in everything from religion to social media. It’s a funny, sharp study of celebrity and all the strings that come with it. A-”
— Entertainment Weekly

“A smart, biting exploration of the tensions between reality and performance, pretending and believing, audience and self, Arts & Entertainments is also a thoughtful meditation on the fundamental human need to believe that somebody out there is watching.”
— Kirkus Reviews

“Arts & Entertainments is indeed entertaining, but it’s also a thoughtful reflection on how we shape our own stories.”
— Shelf Awareness, Starred Review

“Following on his impressive fiction debut, the somber What Happened to Sophie Wilder, Christopher Beha has pivoted away from that novel’s dark tone to create a wicked satire that’s every bit the equal of its predecessor in tackling serious moral issues.”
— BookPage

“Beha’s story could be (and is) a light satirical romp across our cultural lowlands, but it is also a meditation on the inchoate impulses that lead people to expose themselves, often literally, to the world.”
— New York Times Book Review

“It’s short and fun and was an easy read, but there’s also something to chew on. We definitely recommend you add it to your list.”
— Entertainment Weekly / Shelf-Life.EW.com

“It’s the funny type of social satire that is less LOL, more, “God, our society is so messed up that this could easily be real, and all I can do is laugh about it,” and that’s what makes it such a treat to read.”
— Flavorwire