The Exiles: A Novel (Paperback) 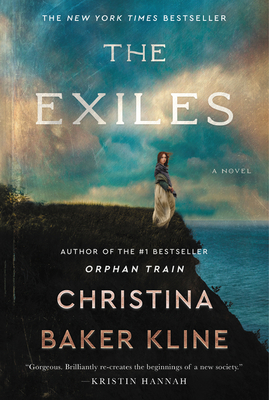 The author of the #1 New York Times bestseller Orphan Train returns with an ambitious, emotionally resonant novel about three women whose lives are bound together in nineteenth-century Australia and the hardships they weather together as they fight for redemption and freedom in a new society.

Seduced by her employer’s son, Evangeline, a naïve young governess in early nineteenth-century London, is discharged when her pregnancy is discovered and sent to the notorious Newgate Prison. After months in the fetid, overcrowded jail, she learns she is sentenced to “the land beyond the seas,” Van Diemen’s Land, a penal colony in Australia. Though uncertain of what awaits, Evangeline knows one thing: the child she carries will be born on the months-long voyage to this distant land.

During the journey on a repurposed slave ship, the Medea, Evangeline strikes up a friendship with Hazel, a girl little older than her former pupils who was sentenced to seven years transport for stealing a silver spoon. Canny where Evangeline is guileless, Hazel—a skilled midwife and herbalist—is soon offering home remedies to both prisoners and sailors in return for a variety of favors.

Though Australia has been home to Aboriginal people for more than 50,000 years, the British government in the 1840s considers its fledgling colony uninhabited and unsettled, and views the natives as an unpleasant nuisance. By the time the Medea arrives, many of them have been forcibly relocated, their land seized by white colonists. One of these relocated people is Mathinna, the orphaned daughter of the Chief of the Lowreenne tribe, who has been adopted by the new governor of Van Diemen’s Land.

Christina Baker Kline is the author of six novels, including the #1 New York Times bestseller Orphan Train as well as A Piece of the World. She lives outside New York City and spends as much time as possible on the coast of Maine. Learn more about Christina at www.christinabakerkline.com.

"Monumental...This episode in history gets a top-notch treatment by Kline, one of our foremost historical novelists. This fascinating 19th-century take on Orange Is the New Black is subtle, intelligent, and thrillingly melodramatic." — Kirkus Reviews (starred review)

"Both uplifting and heartbreaking, this beautifully written novel doesn’t flinch from the ugliness of the penal system but celebrates the courage and resilience of both the first peoples and the settlers who came after, voluntarily or not, to create a new home for themselves and their children." — Library Journal (starred review)

"Kline deftly balances tragedy and pathos, making happy endings hard-earned and satisfying...Book groups will find much to discuss, such as the uses of education, both formal and informal, in this moving work." — Booklist

"Master storyteller Christina Baker Kline is at her best in this epic yet intimate tale of nineteenth-century Australia. I loved this book." — Paula McLain, author of The Paris Wife and Love and Ruin

“Celebrating the bonds between women, the novel explores how lives that seem destined for pain might persevere.” — Real Simple

“The story-telling in The Exiles is triumphant…The women’s struggles are filled with adversity and grief. But the novel also reveals moments of love, courage and bravery and resilience.” — Portland Press Herald

“[Kline's] research, coupled with her knack for telling a compelling story, coalesce in a riveting tale that will keep readers breathlessly hurtling toward the heart-rending conclusion." — Bookreporter

“The author's ability to weave fact with fiction, tragedy with moments of hope, and the everyday with the universal will leave you immersed, wanting more. You’ll open this novel because of history, read on because of story, and close it knowing more about your own life, right here, right now.” — New York Journal of Books

“The Exiles is that rarest of novels, a true page-turner. The action moves along; the reader feels himself to be in the hands of a professional." — Alabama Public Radio