ISIS: The State of Terror (Paperback) 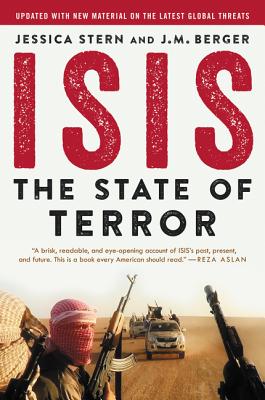 The Islamic State, known as ISIS, exploded into the public eye in 2014 with startling speed and shocking brutality. It has captured the imagination of the global jihadist movement, attracting recruits in unprecedented numbers and wreaking bloody destruction with a sadistic glee that has alienated even the hardcore terrorists of its parent organization, al Qaeda.

Jessica Stern and J.M. Berger, two of America’s leading experts on terrorism, dissect the new model for violent extremism that ISIS has leveraged into an empire of death in Iraq and Syria, and an international network that is rapidly expanding in the Middle East, North Africa and around the world.

ISIS: The State of Terror traces the ideological innovations that the group deploys to recruit unprecedented numbers of Westerners, the composition of its infamous snuff videos, and the technological tools it exploits on social media to broadcast its atrocities, and its recruiting pitch to the world, including its success at attracting thousands of Western adherents. The authors examine ISIS’s predatory abuse of women and children and its use of horror to manipulate world leaders and its own adherents as it builds its twisted society. The authors offer a much-needed perspective on how world leaders should prioritize and respond to ISIS’s deliberate and insidious provocations.

Jessica Stern is a leading expert on terrorism and trauma. Stern is the coauthor with J. M. Berger of ISIS: The State of Terror and the author of Denial: A Memoir of Terror and Terror in the Name of God: Why Religious Militants Kill, selected by the New York Times as a notable book of the year. She has held fellowships awarded by the Guggenheim Foundation, the Erikson Institute, and the MacArthur Foundation. She was a Council on Foreign Relations International Affairs Fellow, a national fellow at Stanford University’s Hoover Institution, and a fellow of the World Economic Forum. Stern is a research professor at Boston University. Prior to teaching, she worked in government, serving on President Clinton’s National Security Council Staff and as an analyst at Lawrence Livermore National Laboratory.

J. M. Berger is a nonresident fellow with the Brookings Institution and the author of Jihad Joe: Americans Who Go to War in the Name of Islam, a critically acclaimed history of the American jihadist movement. He is a regular contributor to Foreign Policy magazine and his website, Intelwire.com, has published thousands of declassified documents on the September 11 attacks and the Oklahoma City bombing.

“Jessica Stern and J.M. Berger’s new book, “ISIS,” should be required reading for every politician and policymaker…Their smart, granular analysis is a bracing antidote to both facile dismissals and wild exaggerations….Stern and Berger offer a nuanced and readable account of the ideological and organizational origins of the group.”
— Washington Post

“By far the most important contribution yet to our understanding of an organization that remains cloaked in mystery and misunderstanding . . . A brisk, readable, and eye-opening account of ISIS’s past, present, and future. This is a book every American should read.”
— Reza Aslan, author of No God but god and Zealot: The Life and Times of Jesus of Nazareth

“A timely and urgent book that is essential reading for analysts and policy makers alike. In what is already a cornerstone contribution, Stern and Berger offer the kind of cold-blood analysis so desperately needed on the poorly understood phenomenon that is the so-called Islamic state.”
— John Horgan, author of The Psychology of Terrorism

“The first serious book to analyze the rise of ISIS . . . Stern and Berger write clearly and persuasively and marshal impressive primary research from ISIS’s prodigious propaganda to help explain how ISIS became the dominant jihadi group today. It’s a terrific and important read.”
— Peter Bergen, author of Manhunt: The Ten-Year Search for Bin Laden from 9/11 to Abbottabad

“Stern and Berger pull back the curtain to expose facts and myths about the violent Salafi apocalyptic cult calling itself the Islamic State. A must-read.”
— Mike Walker, former undersecretary and acting secretary of the United States Army

“A penetrating analysis . . . The book provides important context for an evolving organization and proto-state that is attempting to rewrite the jihadi playbook.”
— Aaron Zelin, Washington Institute for Near East Policy

“ISIS: The State of Terror is a timely and important history of a movement that now defines the 21st century.”
— Sam Kiley, Evening Standard (London)

“This book should be required reading for every politician and policymaker.”
— Washington Post