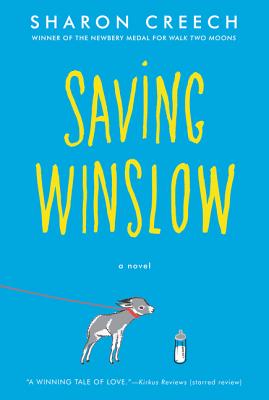 Here’s the perfect story for your 8-year-old who’s moving out of early chapter books. Also a wonderful read-aloud for the whole family, this sweet story has the flavor of a classic. Louie’s missing his older brother who’s joined the army. But instead of feeling sad and sorry for himself, he puts all his energy into saving a baby donkey—Winslow. With a great cast of characters, this book left me filled with joy and happiness.

Louie hasn’t had much luck with pets- but things change when he takes in a frail, newborn donkey he names Winslow! You will fall in love with the simple, honest characters of this modern day classic. Its short chapters are easy to read, but full of the nuances every kid could devour! What I loved most about this story was the portrayal of vulnerability as strength.

“Louie loves animals, but just doesn't seem to have the knack for taking care of them — too many carnival animals have not survived his loving care. So when his father brings home a newborn miniature donkey, Louie's parents tell him not to get his hopes up that the little guy will survive the night, let alone thrive. Louie's determination that Winslow will be okay, the new friendships he makes, and his belief that one person can make a difference makes for a wonderful story.”
— Debbie Buck, Vintage Books, Vancouver, WA

Perfect for fans of Charlotte’s Web and The One and Only Ivan, Saving Winslow is an uplifting modern classic in the making about a young boy who befriends an ailing newborn donkey and nurses him back to health, from New York Times bestseller and Newbery Medal winner Sharon Creech.

Louie doesn't have the best luck when it comes to nurturing small creatures. So when his father brings home a sickly newborn mini donkey, he's determined to save him. He names him Winslow. Taking care of him helps Louie feel closer to his brother, Gus, who is far, far away in the army.

Everyone worries that Winslow won't survive, especially Louie’s quirky new friend, Nora, who has experienced loss of her own. But as Louie's bond with Winslow grows, surprising and life-altering events prove that this fragile donkey is stronger than anyone could have imagined.

Written in the spirit of Creech favorites Moo and Love That Dog, this standout tale about love and friendship and letting go will tug at the heartstrings.

“This heartwarming story is sure to be a hit with fans of E. B. White’s Charlotte’s Web and Kate DiCamillo’s Because of Winn-Dixie.” —School Library Journal (starred review)

“Creech packs a tremendous amount of emotion between the lines of her understated prose. Animal lovers in particular will relish Louie’s hard-won triumphs and find joy in Winslow’s strength.” —Publishers Weekly (starred review)

“Woven into this narrative is a convincing portrayal of human growth and blossoming—the story is told simply but subtly, celebrating the unexpected strength of the vulnerable.” —Horn Book (starred review)

Sharon Creech has written twenty-one books for young people and is published in over twenty languages. Her books have received awards in both the U.S. and abroad, including the Newbery Medal for Walk Two Moons, the Newbery Honor for The Wanderer, and Great Britain’s Carnegie Medal for Ruby Holler.

Before beginning her writing career, Sharon Creech taught English for fifteen years in England and Switzerland. She and her husband now live in Maine, “lured there by our grandchildren,” Creech says.

“Creech packs a tremendous amount of emotion between the lines of her understated prose… Animal lovers in particular will relish Louie’s hard-won triumphs and find joy in Winslow’s strength.” — Publishers Weekly (starred review)

“This heartwarming story is sure to be a hit with fans of E.B. White’s Charlotte’s Web and Kate DiCamillo’s Because of Winn-Dixie.” — School Library Journal (starred review)

“Woven into this narrative is a convincing portrayal of human growth and blossoming—the story is told simply but subtly, celebrating the unexpected strength of the vulnerable.” — Horn Book (starred review)

“Particularly skillful and satisfying… An ideal choice for reading aloud or alone.” — Booklist

“A clear-eyed look at the way humans endure heartbreak and hope.” — Bulletin of the Center for Children’s Books

“The bond that develops between boy and donkey is genuinely heartwarming.... [Creech’s] words evoke imagery that will linger in a reader’s mind long after the final page.” — New York Times Book Review