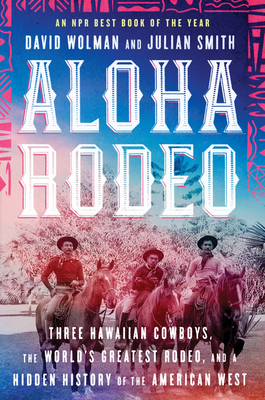 This book takes two far apart worlds—the Wild West and the young Kingdom of Hawaii—and writes for them a common history through an unexpected topic: cowboys. Through them unfolds a multi-generational story of grit, daring, and high adventure, as well as racism and imperialism. This is the kind of US history that usually goes untold; this time, however, it’s told in vivid, transporting narrative.

In August 1908, three unknown riders arrived in Cheyenne, Wyoming, their hats adorned with wildflowers, to compete in the world’s greatest rodeo. Steer-roping virtuoso Ikua Purdy and his cousins Jack Low and Archie Ka’au’a had travelled 4,200 miles from Hawaii, of all places, to test themselves against the toughest riders in the West. Dismissed by whites, who considered themselves the only true cowboys, the native Hawaiians would astonish the country, returning home champions—and American legends.

An unforgettable human drama set against the rough-knuckled frontier, David Wolman and Julian Smith’s Aloha Rodeo unspools the fascinating and little-known true story of the Hawaiian cowboys, or paniolo, whose 1908 adventure upended the conventional history of the American West.

What few understood when the three paniolo rode into Cheyenne is that the Hawaiians were no underdogs. They were the product of a deeply engrained cattle culture that was twice as old as that of the Great Plains, for Hawaiians had been chasing cattle over the islands’ rugged volcanic slopes and through thick tropical forests since the late 1700s.

Tracing the life story of Purdy and his cousins, Wolman and Smith delve into the dual histories of ranching and cowboys in the islands, and the meteoric rise and sudden fall of Cheyenne, “Holy City of the Cow.” At the turn of the twentieth century, larger-than-life personalities like “Buffalo Bill” Cody and Theodore Roosevelt capitalized on a national obsession with the Wild West and helped transform Cheyenne’s annual Frontier Days celebration into an unparalleled rodeo spectacle, the “Daddy of ‘em All.”

The hopes of all Hawaii rode on the three riders’ shoulders during those dusty days in August 1908. The U.S. had forcibly annexed the islands just a decade earlier. The young Hawaiians brought the pride of a people struggling to preserve their cultural identity and anxious about their future under the rule of overlords an ocean away. In Cheyenne, they didn’t just astound the locals; they also overturned simplistic thinking about cattle country, the binary narrative of “cowboys versus Indians,” and the very concept of the Wild West. Blending sport and history, while exploring questions of identity, imperialism, and race, Aloha Rodeo spotlights an overlooked and riveting chapter in the saga of the American West.

DAVID WOLMAN is a Contributing Editor at Outside. He has written for the Wired, the New York Times, New Yorker, Nature, and many other publications, and his work has been anthologized in the Best American Science and Nature Writing series. He is the author of The End of Money, Righting the Mother Tongue, and A Left-Hand Turn Around the World. David lives in Portland, Oregon, with his family.

JULIAN SMITH received a Banff Mountain Book Award and a Lowell Thomas Travel Journalism Award for Crossing the Heart of Africa: An Odyssey of Love and Adventure. The coauthor of Smokejumper: A Memoir by One of America's Most Select Airborne Firefighters, he has written for Smithsonian, National Geographic Traveler, Wired, Outside, and the Washington Post, among other publications. Julian lives in Portland, Oregon.

“This inspiring and impeccably crafted story of against-all-odds triumph is one that movie-makers surely will yearn to produce, seeing in Wolman and Smith’s elegantly told Aloha Rodeo a new Chariots of Fire, with Cheyenne’s Frontier Days standing in for the Paris Olympics, the islands of Hawaii for the British Isles, and, at center stage, three brave cowboys, no hats and all cattle. I loved this book, truly.”
— SIMON WINCHESTER, author of Pacific, The Men Who United the States, and The Professor and the Madman

“David Wolman and Julian Smith’s masterful Aloha Rodeo is like uncovering a beautiful fresco you never knew was there, each turned page revealing another vivid and colorful piece of a true American West story that had lain long buried until now.”
— SALLY JENKINS, award-winning Washington Post sports columnist and author of The Real All-Americans

“Aloha Rodeo accomplishes the bronco-busting trick of combining thorough research with a fast-paced narrative. Who knew that three young men from Hawaii would transform the sport of rodeo, bring pride to their homeland, and be at the center of such a riveting story.”
— TOM CLAVIN, author of Wild Bill

“Breaks new ground in the history of the American cowboy. … [Wolman and Smith] expertly weave a complex story. … A must-read.”
— True West

“Engaging, thorough prose. … The narratives are so wild that they often read like fiction. … If your perception of cowboy culture has largely been shaped by Louis L’Amour, Lonesome Dove and John Wayne, hold onto your hats. Aloha Rodeo blows open a canyon of inclusionary cowboy history as wide as the Rio Grande.”
— BookPage, STARRED Review

“Fascinating. ... [One] of the modern greats. ... A truly entertaining, educational, and satisfying tale, told with verve and gusto.”
— Aspen Daily News

“The 4,000-mile journey of Waimea cowboy Ikua Purdy and his two cousins to the annual Frontier Days rodeo in Cheyenne, Wyoming, is recounted in a well-researched tale that blends the colorful past of both America’s Wild West and the lesser-known paniolo culture of the Hawaiian Islands. Filled with the excitement, adventure, and dangers of bronco busting and steer roping, Wolman and Smith’s Aloha Rodeo is an inspiring and fast-paced read of an unexpected hero who reigned in a victory for his island nation from the clutches of a sport long dominated by Anglos.”
— STEPHEN L. MOORE, author of Texas Rising

“A sweeping epic. … A triumphant underdog tale. … Through a combination of thorough research and literary prowess, [Wolman and Smith] manage to turn an obscure footnote into a gripping narrative.”
— Willamette Week

“Dramatic. … Aloha Rodeo is more than a cowboy epic. It is a history of the Wild West extended far beyond the coast of California.”
— Stanford Magazine

“Immersive. … This thoughtful look at Hawaii’s place in the Wild West will appeal to readers interested in underexplored elements of American history.”
— Publishers Weekly

“Packs a lot of history but reads like a Western. ... I would highly recomment this book to anyone interested in the history of Hawaii, the West, or the rodeo.”
— Manhattan Book Review