Never Have I Ever: A Novel (Paperback) 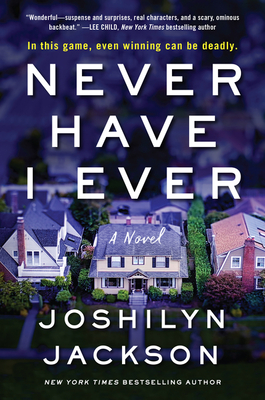 When Roux, an alluring and mysterious new neighbor, shows up uninvited at the door of the local book club meeting, all discussions of the book end as the suburban housewives are drawn into her provocative game of “never have I ever.” Joshilyn Jackson’s latest is a page-turning game of cat and mouse that will keep you guessing!

A friendly neighborhood book club is rattled by the new member who plies the with wine and encourages them to reveal their dark hidden secrets.  What follows is a story of vengeance, deception, love and forgiveness. How would we handle a threat from the past?  Follow this great story and great read to the final resolution.

“Never Have I Ever will take you on a breathtaking journey from beginning to end. Jackson weaves a masterful mystery with unexpected twists and turns on every page. The story follows Amy Whey, a Florida housewife with a dark secret safely buried in the past until a stranger shows up to her neighborhood book club and starts a game that hurtles her back into her deepest, most hidden secrets. This story kept me guessing until the very end and still managed to surprise me. This is shaping up to be my favorite novel of the year.”
— Dean Hunter, Fountain Bookstore, Richmond, VA

From New York Times bestselling author Joshilyn Jackson, a twisting novel of domestic suspense in which a group of women play a harmless drinking game that escalates into a war of dark pasts

In this game, even winning can be deadly...

Amy Whey is proud of her ordinary life and the simple pleasures that come with it—teaching diving lessons, baking cookies for new neighbors, helping her best friend, Charlotte, run their local book club. Her greatest joy is her family: her devoted professor husband, her spirited fifteen-year-old stepdaughter, her adorable infant son. And, of course, the steadfast and supportive Charlotte. But Amy’s sweet, uncomplicated life begins to unravel when the mysterious and alluring Angelica Roux arrives on her doorstep one book club night.

Sultry and magnetic, Roux beguiles the group with her feral charm. She keeps the wine flowing and lures them into a game of spilling secrets. Everyone thinks it’s naughty, harmless fun. Only Amy knows better. Something wicked has come her way—a she-devil in a pricey red sports car who seems to know the terrible truth about who she is and what she once did.

When they’re alone, Roux tells her that if she doesn’t give her what she asks for, what she deserves, she’s going to make Amy pay for her sins. One way or another.

To protect herself and her family and save the life she’s built, Amy must beat the devil at her own clever game, matching wits with Roux in an escalating war of hidden pasts and unearthed secrets. Amy knows the consequences if she can’t beat Roux. What terrifies her is everything she could lose if she wins.

A diabolically entertaining tale of betrayal, deception, temptation, and love filled with dark twists leavened by Joshilyn Jackson’s trademark humor, Never Have I Ever explores what happens when the transgressions of our past come back with a vengeance.

Joshilyn Jackson is the New York Times bestselling author of nine novels, including gods in Alabama and The Almost Sisters. Her books have been translated into a dozen languages. A former actor, Jackson is also an award-winning audiobook narrator. She lives in Decatur, Georgia, with her husband and their two children.

“[An] epic duel between two flawed women—it’s the perfect thriller to round out your summer.”
— People

“Never Have I Ever becomes a tale of moral suspense in addition to a psychological thriller. Its several plot twists are surprising and effective, and there are gripping sequences involving Amy’s work as a deep-sea diver woven logically into the narrative. Many books claim to be the perfect beach read. This one doesn’t, but it certainly fits the bill.”
— Wall Street Journal

"Jackson has been establishing herself as a master of domestic suspense for years, and her hyped latest should do little to change that. A carefree neighborhood evening of games, gossip, and wine gradually evolves into something much more sinister, as engineered by a woman harboring unsettling secrets."
— Entertainment Weekly

“Several plot twists are surprising and effective, and there are gripping sequences involving Amy’s work as a deep-sea diver woven logically into the narrative... Perfect beach read.”
— Wall Street Journal on Never Have I Ever

“Nail-biting suspense.… Jackson builds on her talent for creating imperfect, capable, and multi-layered characters to write smart suspense, driven by the intelligence and determination of the instigator and her prey… Never Have I Ever marks a new high in Jackson’s career.”
— Booklist (starred review) on Never Have I Ever

“Wonderful—suspense and surprises, real characters, and a scary, ominous backbeat.  This feels like the book Jackson was born to write.”
— Lee Child, New York Times Bestselling Author, on Never Have I Ever

“A smart, original thriller with real, compelling characters and a chilling reveal. I couldn’t turn the pages fast enough.”
— Clare Mackintosh, New York Times bestselling author of I Let You Go, on Never Have I Ever

“The more Roux and Amy became obsessed with each other, the more obsessed I became with the book. Jackson is a master... Fans of Joshilyn Jackson and newcomers alike will eat this book up. I did, and I’m hungry again.”
— Sara Gruen, New York Times bestselling author of Water for Elephants, on Never Have I Ever

“A heart-pounding tale of cat and mouse with twists you won’t see coming. Just when you think you couldn’t be more shocked, Jackson delivers a mind-blowing ending. Riveting!”
— Liv Constantine, internationally bestselling author of The Last Mrs. Parrish, on Never Have I Ever

“[A] nail-biter....Winner takes all in this addictive, heart-thumping read.”
— Family Circle Magazine on Never Have I Ever

“Joshilyn Jackson’s newest novel weaves a wicked tale right from its opening pages...With excellent pacing, clever character development, fun plot twists and a palpable setting, Never Have I Ever is a binge-worthy read. Jackson brings her first thriller to the table this summer, and you don’t want to miss it.”
— BookPage.com on Never Have I Ever

“Jackson’s novel is chock-full of dramatic reveals and twisty turns... Be warned: It’s a stay-up-all-night kind of book. Compulsively readable.”
— Kirkus Reviews on Never Have I Ever

“If you’re streaming the second season of “Big Little Lies,” take a screen break to read Never Have I Ever by Atlanta author Joshilyn Jackson. The novel is a deliciously, twisty domestic suspense tale... It’s Jackson’s best yet.”
— The Augusta Chronicle on Never Have I Ever

“We’re looking forward to Never Have I Ever bringing Jackson the credit she deserves. Jackson’s latest is a classic interloper tale—a woman named Roux enters the lives of a seemingly perfect family and of course, her disruption reveals all the family’s darkest secrets.”
— CrimeReads, “The Most Anticipated Crime Books of Summer“

“Entertaining . . . Well-developed, memorable characters and an action-packed plot.”
— Publishers Weekly on Never Have I Ever

“One of the most entertaining books you will read this summer.”
— Brooklyn Digest on Never Have I Ever

“This book is well written and full of twists and turns that seem to keep unraveling until the end… It will keep you turning page after page and just when you think you have it all figured out, you’re left guessing even more. I would highly recommend this book and you won’t regret reading it.”
— BookTrib.com on Never Have I Ever