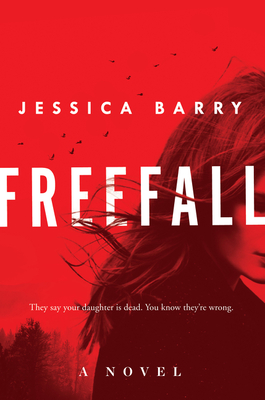 A nail-biting thriller showcasing a mother’s unconditional love for a daughter two years estranged, and a feisty heroine who will do whatever it takes to survive and make her way home. Barry’s debut thriller is a rollercoaster ride of emotions that will leave you exhilarated and breathlessly waiting for her next book.

A great read for the psychological thriller lover. This novel will keep you on the edge of your seat trying to figure out just what heck is going on. If you are anything like me, you will not be able to resist reading it all night.

“There used to be a carnival ride where you would stand against a wall and as and the ride spun faster and faster, the floor would drop out but the force of the spin would keep you pinned to the wall. I got the same feeling when reading Jessica Barry’s Freefall. The plot moved faster and faster until I felt myself holding my breath, right up until the final page. Clear your schedule and order takeout before you start this thriller!”
— Mary O'Malley , Anderson's Bookshop (La Grange), La Grange, IL

“The corporate malfeasance and shady conspiracies of John Grisham, with the frank feminism of two rounded female protagonists.” — Entertainment Weekly

They say your daughter is dead.

When her fiancé’s private plane crashes in the Colorado Rockies, everyone assumes Allison Carpenter is dead.

But Maggie, Allison’s mother back home in Owl Creek, Maine, refuses to believe them. Maggie knows her daughter – or she used to, anyway. For the past two years, the two women have been estranged, and while Maggie doesn’t know anything about Ally’s life now – not even why she was on a private plane to begin with – she still believes in her girl’s strength, and in their love for each other.

As Allison struggles across the treacherous mountain wilderness, Maggie embarks on a desperate search for answers about the world Allison has been involved in. What was she running from? And can Maggie uncover the truth in time to save her?

Told from the perspectives of a mother and daughter separated by distance but united by an unbreakable bond, Freefall is a heart-stopping, propulsive thriller about two tenacious women overcoming unimaginable obstacles to protect themselves and the ones they love.

Jessica Barry is a pseudonym for an American author who grew up in a small town in Massachusetts and was raised on a steady diet of library books and PBS.

She attended Boston University, where she majored in English and Art History, before moving to London in 2004 to pursue an MA from University College London.

She lives with her husband, Simon, and their two cats, Roger Livesey and BoJack Horseman.

“Jessica Barry’s debut novel opens at full throttle and never lets up...Set aside a few hours before you open this book...once you start reading, you won’t want to stop.”

“Most debut thriller writers would be happy to have one amazing story to tell. Jessica Barry’s come up with two, and the way she weaves them together will have you on the edge of your seat. Freefall is an electric mix of action and emotional drama that never stops, never slows down.”
— Liv Constantine, National Bestselling Author of The Last Mrs. Parrish

‘A gripping page-turner. Freefall is exactly what a great thriller should be.’

“A brilliant, addictive page-turner with sharply drawn, dueling mother-daughter narrators who you will root for and empathize with as they struggle to survive their harrowing present, come to terms with a troubled past and fight to find their way home.”
— Kimberly McCreight, New York Times bestselling author of Reconstructing Amelia and Where They Found Her

“A daring tightrope walk of a novel. Exhilarating, emotional -- a thriller charged with genuine depth and raw power.”
— AJ Finn, author of the #1 NYT Bestselling The Woman in the Window

“The corporate malfeasance and shady conspiracies of John Grisham, with the frank feminism of two rounded female protagonists.”
— Entertainment Weekly

“Hold on to your hats. Freefall is sure to take one on the ride of a lifetime ... This is a gut-wrenching suspense thriller in which both the mother and daughter’s only thoughts are to endure, reunite, and make amends while taking the reader on a heartrending journey of trepidation and nail-biting apprehension.”
— New York Journal of Books

“Written in a fast-paced style, each chapter offers new twists as motives are brought to light and secrets that Allison struggled to hide are revealed. Barry’s debut novel will keep readers guessing to the end, and fans of Lisa Jackson and Lisa Scottoline will enjoy this thriller written with a focus on family relationships...this debut will be everywhere.”
— Booklist

“Pseudonymous author Barry spins a great tale using familiar tropes but adding a surprising amount of heart to the mystery showing the fierce bond between mother and daughter.”
— Library Journal

“A scintillating thriller that breathes life into every word.”
— Independent

“Freefall begins as an action-packed/heart-stopping thriller as it logically and smoothly leads into the self-examination of two women estranged from each other but still united by love.”
— Associated Press

“Jessica Barry’s debut novel is not only a thriller but the story of a mother-daughter relationship that fell apart, as so many do, after one misstep. With feelings so raw, neither one reached out until it was almost too late. But bonds formed over so many years ultimately prove unbreakable and the two women come together to save each other in the final moments.”
— Woman Around Town 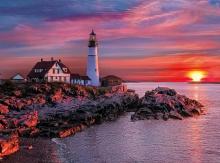 Test your puzzle skills with this 500 piece jigsaw from Cementoni. This puzzle features art of the Portland Head Light at sunset, a historic...