The Children's Train: A Novel (Paperback) 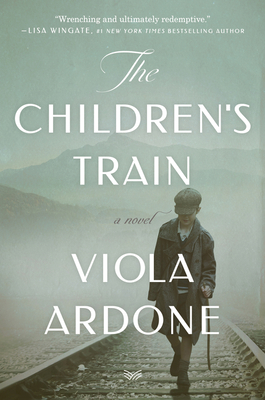 By Viola Ardone, Clarissa Botsford (Translated by)
$16.99
On Our Shelves; Typically Ships in 1 - 2 Days

“The innocence of childhood collides with the stark aftermath of war in this wrenching and ultimately redemptive tale of family, seemingly impossible choices, and the winding paths to destiny, which sometimes take us to places far beyond our imaginings.” – Lisa Wingate, #1 New York Times Bestselling Author of Before We Were Yours and The Book of Lost Friends

“[The Children’s Train] leaves you with a great sense of the importance of family and the tough decisions that must be faced as a result of that love.”  – Shelf Awareness

Based on true events, a heartbreaking story of love, family, hope, and survival set in post-World War II Italy—written with the heart of Orphan Train and Before We Were Yours—about poor children from the south sent to live with families in the north to survive deprivation and the harsh winters.

Though Mussolini and the fascists have been defeated, the war has devastated Italy, especially the south. Seven-year-old Amerigo lives with his mother Antonietta in Naples, surviving on odd jobs and his wits like the rest of the poor in his neighborhood. But one day, Amerigo learns that a train will take him away from the rubble-strewn streets of the city to spend the winter with a family in the north, where he will be safe and have warm clothes and food to eat.

Together with thousands of other southern children, Amerigo will cross the entire peninsula to a new life. Through his curious, innocent eyes, we see a nation rising from the ashes of war, reborn. As he comes to enjoy his new surroundings and the possibilities for a better future, Amerigo will make the heartbreaking choice to leave his mother and become a member of his adoptive family.

Amerigo’s journey is a moving story of memory, indelible bonds, artistry, and self-exploration, and a soaring examination of what family can truly mean. Ultimately Amerigo comes to understand that sometimes we must give up everything, even a mother's love, to find our destiny.

Translated from the Italian by Clarissa Botsford

Viola Ardone was born in Naples in 1974. A high school Latin and Italian teacher, she holds a degree in literature and worked in academic publishing. She is the author of two previous novels in Italian, Le ricette del cuore in subuglio and Una revoluzzione sentimentale.

“The innocence of childhood collides with the stark aftermath of war in this wrenching and ultimately redemptive tale of family, seemingly impossible choices, and the winding paths to destiny, which sometimes take us to places far beyond our imaginings.”
— Lisa Wingate, author of Before We Were Yours and The Book of Lost Friends

“The Children’s Train is a sympathetic, well-crafted novel filled with vacation-worthy sights and authentic experiences from an Italy that balances folk tradition with modernity.”
— New York Journal of Books

“Ardone’s novel will appeal to fans of Elena Ferrante, but it stands on its own as a fictionalized account of an exceptional—and exceptionally complicated—social experiment.”
— BookPage

“[The Children’s Train] leaves you with a great sense of the importance of family and the tough decisions that must be faced as a result of that love.”
— Shelf Awareness

“The novel is poignant, delicate, [and] profound.”
— Bruno Elpis

“The Children's Train is for those who want to jump into a painful but hopeful historical period and for those who love fiction from the point of view of the little ones.”
— Elena Naldi, Leggere a Colori

“Amerigo's voice won me over. I devoured the pages of his story, because in his stories as a child there is so much lightheartedness and fear at the same time that one cannot help but love.”
— Scheggia tra le Pagine