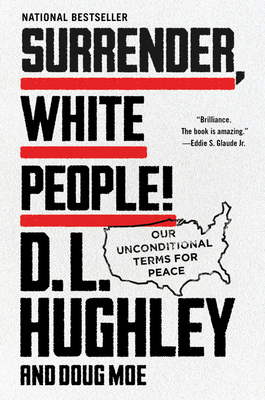 "Hughley uses his trademark humor to address the stark divisions in society that stem from centuries of white supremacy." —People

Surrender, white people! After 400 years of white supremacy in America, a reckoning is here. These are the terms of peace–and they are unconditional. Hope you brought a sense of humor, because this is gonna sting.

After centuries of oppressing others, white people are in for a surprise: You’re about to be a minority yourself. Yes, the face of America is getting a lot browner—and a reckoning is coming. Black and brown folk are not going to take a back seat anymore. It’s time to surrender your unjust privileges and sue for peace while the getting’s still good. Lucky for America, D.L. Hughley has a plan.

On the eve of America becoming a majority-minority nation, Hughley warns, the only way for America to move forward peacefully is if Whites face their history, put aside all their visions of superiority, and open up their institutions so they benefit everyone in this nation.  But we can still have fun with this right?  Surrender, White People! hilariously holds America account for its wrongs and offers D.L.'s satirical terms for reparations and reconciliation.

But it’s not all bad news, white folks. The upside is that if you put D.L.’s plan into effect, you can FINALLY get black people to stop talking about oppression, discrimination, and their place in America. Now, that’s something we ALL can get behind.

D.L. Hughley is one of “The Original Kings of Comedy.” He hosts the national radio program The D.L. Hughley Show, which is syndicated in more than sixty markets. His comedy specials have appeared on HBO, Netflix, Comedy Central, and Showtime. His satirical documentary special, DL Hughley: The Endangered List, received the prestigious George Foster Peabody Award. He created and starred in the ABC sitcom The Hughleys. He is the author of the New York Times bestsellers How Not to Get Shot and Black Man, White House. How Not to Get Shot was selected as a finalist for the Goodreads Choice Awards and the Audie Awards. D.L. lives with his family in Los Angeles, California.

Doug Moe is the co-author of two books for D.L. Hughley: “Surrender, White People!: Our Unconditional Terms for Peace” and the New York Times Bestseller “How Not to Get Shot: And Other Advice From White People” (“A satirical but apt addition to the culture’s fraught conversation about race.” - New York Times Book Review).  His book “Man Vs Child: One Dad’s Guide to the Weirdness of Parenting” was named one of Amazon’s Best Humor Books of 2017.  He’s a longtime performer and instructor at the Upright Citizens Brigade Theatre. On TV, you've maybe seen me in "Inside Amy Schumer," "30 Rock" or "Difficult People," among other places.

"Hughley uses his trademark humor to address the stark divisions in society that stem from centuries of white supremacy. His solution involves a reckoning with America's history, reparations, and a hard look at oneself." — People

"A satirical look at white supremacy, which examines racial inequality in the United States across education, health care and the housing market." — New York Times

"A simultaneously humorous and serious take on race relations in the wake of a near unprecedented resistance effort to stem fatal police violence.  ... The author effectively combines his outspoken comedic sensibilities with his longtime experience with political commentary. ... Mixes important statistics and earnest policy reforms with his witty perspective gained from his upbringing in South Central LA and decades of successful comedy tours in front of black and white audiences. Readers will frequently laugh out loud, but there’s far more to this couldn’t-be-timelier book than just jokes. ... Bitingly comedic." — Kirkus Reviews