Shed No Tears: A Novel (A Cat Kinsella Novel #3) (Paperback) 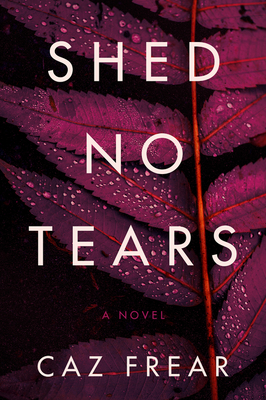 This is book number 3 in the A Cat Kinsella Novel series.

“Caz Frear’s third installment of Cat Kinsella mysteries doesn’t disappoint! Kinsella is whip smart, takes no nonsense, and is a wry-one-liner machine. In their newest case, Kinsella and her partner, Luigi Parnell, find a connection to a serial killer. Christopher Masters was arrested for the kidnapping and murder of four women six years ago. His final victim wasn’t found until now, so Kinsella may finally have the evidence to close the case once and for all. But as they dive back into a cold case, they find some troubling issues. As they dig deeper, they head into a rabbit hole they may never be able to get out of. Wonderfully twisty and satisfyingly puzzling, the newest mystery by Frear is a must for all thriller fans.”
— Scott Lange, The Bookman, Grand Haven, MI

Growing up in a London family with ties to organized crime, Detective Constable Cat Kinsella knows the criminal world better than most cops do. As a member of the city’s Metropolitan Police, she’s made efforts to distinguish herself from her relatives. But leading an upstanding life isn’t always easy, and Cat has come close to crossing the line, a fact she keeps well hidden from her superiors.

Working their latest case, Cat and her partner Luigi Parnell discover a connection to a notorious criminal: serial killer Christopher Masters, who abducted and killed several women in 2012. Though the cops eventually apprehended him, his final victim, Holly Kemp, was never found and he never confessed to her murder, despite the solid eyewitness testimony against him. Now, six years later, the discovery of Holly’s remains near Cambridge seems to be the definitive proof needed to close the case.

Still, a few key items of evidence don’t quite line up. As Cat and Parnell look closer, they find discrepancies that raise troubling questions. But someone will do anything to keep past secrets hidden—and as they inch closer to the truth, they may be putting themselves in jeopardy . . .

“Another standout thriller from the phenomenal Caz Frear. Sharply written and expertly plotted. . . . Cannot wait for the next Cat Kinsella!"
— Chris Whitaker, New York Times bestselling author of We Begin at the End

“Bubbling with energy and its heroine’s tart humor, Shed No Tears is the third book in Caz Frear’s series featuring Kinsella. The Irish connection and Frear’s easy way with dialogue have drawn inevitable comparisons to Tana French, but Frear is less brooding and brisker in moving the plot forward, making this book an addictive read.”
— Airmail

“A wondrously atmospheric tale where the fog rolling in over the streets of London mirror the moral morass in which Kinsella finds herself mired. This is mystery writing of the highest order.”
— Jon Land, Providence Journal

“Frear skillfully guides Shed No Tears to a solid conclusion that is as believable as it is surprising. Beginning with her 2018 debut Sweet Little Lies, Frear has proven to be a talent to watch.”
— South Florida Sun-Sentinel

"Frear’s complex plotting, vivid and nuanced characterization and realistic dialogue confirm her stature as a top-notch practitioner of the genre."
— The Free Lance-Star (Fredericksburg, VA)

“With the release of Shed No Tears, another triumph in the series, Frear is clearly separating herself from the overcrowded pack of writers in the mystery genre and carving out her own unique path. . . The writing is taut and complex throughout. Readers better catch on quickly before new authors in the genre start being called ‘the new Caz Frear.’”
— BookReporter

“Artfully paced. . . . each revelation feels earned and adds to the suspense. . . . Frear’s tight control of the reins keeps the tension high. Shed No Tears grabs the reader and doesn’t let go.”
— BookPage

"I loved it! I love the central character Cat Kinsella, the brilliant dialogue, clear plotting and unique voice. This is my favorite in the series to date."
— Ann Cleeves, author of The Long Call

“Frear creates an atmosphere of tension among the detectives and witnesses and in Cat’s personal life that will make readers want to devour this mystery in one sitting.”
— Library Journal

“Frear has done an exemplary job with Shed No Tears. To say that this was a book I couldn’t put down would be an understatement. I believe Cat Kinsella is a detective that the world of literature will be seeing more of, and I very much look forward to that.”
— Criminal Element

"Whip-smart, brutally blunt, and always hilarious, Cat Kinsella is one of the best investigators in crime fiction today. In her third installment, Caz Frear drops Cat into a wickedly twisted plot, complete with a complex puzzle of a crime, vividly drawn supporting cast, and pitch-perfect dialogue. As fans of Frear's have come to expect, the deeper Cat delves into the case, the more she's tugged between family loyalty, personal ambition, and the call of duty. Another riveting story in a must-read series."
— Kelsey Rae Dimberg, author of Girl in the Rearview Mirror

"Caz Frear is a terrific writer, and she's crafted a real winner. Suspenseful and twisty—and with a to-die-for main character in whip-smart Cat Kinsella—SHED NO TEARS is a bingeworthy read."
— Alison Gaylin, Edgar Award-winning author of Never Look Back

"Caz Frear proves once again why she's in the top echelon of thriller writers.  SHED NO TEARS is everything readers could want in a police procedural: insider details on investigative techniques, a rogues' gallery of fascinating suspects, and most of all, a gut-punch of a central mystery.  Welcome back DC Cat Kinsella, one of the most complex and empathetic heroines of the twenty-first century."
— Glen Erik Hamilton, author of the Van Shaw series

“Immediately from the first page, SHED NO TEARS by Caz Frear plunges you into a fast-paced, twisty police investigation chock-full of intrigue, secrets, and lies. Frear’s expert plot and pacing will have you turning the pages wondering who’s deceiving whom, the pinch of family drama will make you wonder if anyone can make it out unscathed, and protagonist Cat Kinsella’s wry sense of humor and deadpan one-liners are sure to make you laugh out loud. An irresistible, perfect, and thrilling read.”
— Hannah Mary McKinnon, bestselling author of Sister Dear

“It’s not easy to pull off a top-notch character-driven police procedural, but author Caz Frear accomplishes that task with ease. The third novel in her DC Cat Kinsella series features a tough yet flawed London detective who serves up attitude with a comedic slant. Cleverly plotted with a cast of unique characters, Cat’s demanding work life is unduly complicated by a dysfunctional family with ties to organized crime.  Sharply written with snappy dialogue, this fast-paced and compelling thriller will keep you guessing until the very end.”
— Catharine Riggs, author of What She Gave Away and What She Never Said

“Caz Frear has fashioned her second terrific crime thriller . . . a sumptuously unsettling mystery that lives up to all the hype. . . . This is the kind of mystery Agatha Christie would have penned these days if she were still alive, with the personal sharing equal billing with the professional. And Kinsella is the best female detective from across the pond since Detective Chief Inspector Jane Tennison of the brilliant Prime Suspect series.”
— Providence Journal on Stone Cold Heart

“Caz Frear has done it again. The author of the critically acclaimed bestseller Sweet Little Lies has created another can’t miss summer hit. . . . In Stone Cold Heart we witness the highly anticipated return of the unforgettable Cat Kinsella, the smart and sassy London Detective Constable. And like its predecessor this novel is spellbinding from start to finish. . . . A winner . . . masterfully written.”

"A dark and smart page-turner."