The Wright Sister: A Novel (Paperback) 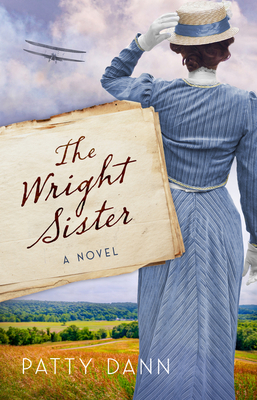 “The story of Katharine Wright is told here through imagined letters and diary entries. She has married late in life and as a consequence has been shunned by her brother, Orville. As a devoted confidant and caregiver to both Orville and Wilbur Wright, this is an unexpected blow. The pain of physical and emotional separation comes through clearly. At the same time, we learn about her life, told with frankness, wonder, and humor. A story that will leave readers wanting to know more about this delightful woman.”
— Susan Hepburn, Red Balloon Bookshop, St. Paul, MN

“Katharine Wright — beloved sister and fervent supporter of Wilbur and Orville Wright, suffragette, feminist, aspiring teacher — becomes Orville’s caretaker and support after the death of Wilbur. Orville becomes more and more reclusive, finally cutting Katharine out of his life. The letters to Orville and musings of a sister who endeavors to close the ever-widening gap between the siblings make this a lovely historical novel.”
— Lynda O'Brien, An Unlikely Story, Plainville, MA

An epistolary novel of historical fiction that imagines the life of Katharine Wright and her relationship with her famous brothers, Wilbur and Orville Wright.

On December 17, 1903, Orville and Wilbur Wright flew the world’s first airplane at Kitty Hawk, North Carolina, establishing the Wright Brothers as world-renowned pioneers of flight. Known to far fewer people was their whip-smart and well-educated sister Katharine, a suffragette and early feminist.

After Wilbur passed away, Katharine lived with and took care of her increasingly reclusive brother Orville, who often turned to his more confident and supportive sister to help him through fame and fortune. But when Katharine became engaged to their mutual friend, Harry Haskell, Orville felt abandoned and betrayed. He smashed a pitcher of flowers against a wall and refused to attend the wedding or speak to Katharine or Harry. As the years went on, the siblings grew further and further apart.

In The Wright Sister, Patty Dann wonderfully imagines the blossoming of Katharine, revealed in her “Marriage Diary”—in which she emerges as a frank, vibrant, intellectually and socially engaged, sexually active woman coming into her own—and her one-sided correspondence with her estranged brother as she hopes to repair their fractured relationship. Even though she pictures “Orv” throwing her letters away, Katharine cannot contain her joie de vivre, her love of married life, her strong advocacy of the suffragette cause, or her abiding affection for her stubborn sibling as she fondly recalls their shared life.

An inspiring and poignant chronicle of feminism, family, and forgiveness, The Wright Sister is an unforgettable portrait of a woman, a sister of inventors, who found a way to reinvent herself.

Patty Dann's novels have been translated into French, German, Italian, Portuguese, Dutch, Chinese, Korean, and Japanese. Her novel Mermaids was made into a movie starring Cher, Winona Ryder, and Christina Ricci. Dann is also the author of The Butterfly Hours: Transforming Memories into Memoir, The Goldfish Went on Vacation: A Memoir of Loss, and The Baby Boat: A Memoir of Adoption. Dann's articles have appeared in the New York Times, Boston Globe, O, The Oprah Magazine, and numerous other publications. She teaches writing workshops at the West Side YMCA in New York. Dann is married to journalist Michael Hill and has one son and two stepsons.

“The Wright Sister is a marvel—a perfect, very dear and brilliant novel whose characters are now stored in my heart like favorite, absent friends. Long live the remarkable Katharine Wright, her famous brothers, and author Patty Dann, who brought them back to life for this gobsmacked, grateful reader.”

— Elinor Lipman, author of Good Riddance and On Turpentine Lane

"No longer hidden by history, the wind beneath Wilbur and Orville’s wings--their brainy sibling Katharine—soars in The Wright Sister. Patty Dann’s cunning epistolary page-turner chronicles a woman taking flight past fifty while it reflects on sexual awakening, early feminism, and the unbreakable bonds of filial love.  Immensely readable!"
— Sally Koslow, author of Another Side of Paradise and the international best-seller, The Late, Lamented Molly Marx

"From the first sentence to the last Patty Dann captures the voice of Katharine Wright with uncanny verisimilitude. Poignant."
— Sheila Kohler, author of Once We Were Sisters and Open Secrets

"Dann does an amazing job of transporting readers in time by imaging Katharine's joy, her devotion to Orville, and the pain she feels from their one-sided correspondence."
— Booklist