The Vietri Project: A Novel (Hardcover) 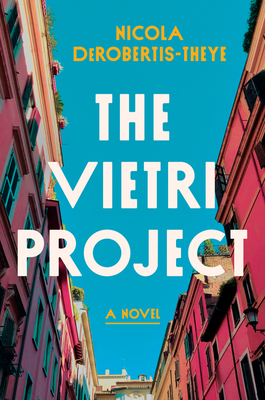 By Nicola DeRobertis-Theye
Email or call for price

A Lithub, Good Reads, Bustle, and The Millions Most Anticipated Book of 2021

"The Vietri Project is a riveting, shifting quest, an evocative trip to Rome, and a beautiful portrayal of the ways you need to return to the past in order to move forward. A great delight from start to finish.”--Lily King, New York Times bestselling author of Writers and Lovers

A search for a mysterious customer in Rome leads a young bookseller to confront the complicated history of her family, and that of Italy itself, in this achingly intimate debut with echoes of Lily King and Elif Batuman.

Working at a bookstore in Berkeley in the years after college, Gabriele becomes intrigued by the orders of signor Vietri, a customer from Rome whose numerous purchases grow increasingly mystical and esoteric. Restless and uncertain of her future, Gabriele quits her job and, landing in Rome, decides to look up Vietri. Unable to locate him, she begins a quest to unearth the well-concealed facts of his life.

Following a trail of obituaries and military records, a memoir of life in a village forgotten by modernity, and the court records of a communist murder trial, Gabriele meets an eclectic assortment of the city’s inhabitants, from the widow of an Italian prisoner of war to members of a generation set adrift by the financial crisis. Each encounter draws her unexpectedly closer to her own painful past and complicated family history—an Italian mother diagnosed with schizophrenia and institutionalized during her childhood, and an extended family in Rome still recovering from the losses and betrayals in their past. Through these voices and histories, Gabriele will discover what it means to be a person in the world; a member of a family and a citizen of a country—and how reconciling these stories may be the key to understanding her own.

Nicola DeRobertis-Theye was an Emerging Writing Fellow at the New York Center for Fiction, and her work has been published in Agni, Electric Literature, and LitHub. A graduate of UC Berkeley, she received an MFA in Creative Nonfiction from the University of North Carolina, Wilmington, where she was the fiction editor of its literary magazine Ecotone. She is a native of Oakland, CA and lives in Brooklyn, New York.

"Nicola DeRobertis-Theye has written a smart, taut debut about a woman in her twenties trying to find a path into the rest of her life. The Vietri Project is a riveting, shifting quest, an evocative trip to Rome, and a beautiful portrayal of the ways you need to return to the past in order to move forward. A great delight from start to finish.”
— Lily King, New York Times bestselling author of Writers and Lovers

“The Vietri Project offers the best kind of mystery, one where each new discovery not only opens up our understanding of the story, but of the world we live in. Nicola DeRobertis-Theye writes with precision, such finely-tuned sentences, and conjures the past without getting lost in it, using it as a map to find a way towards something beautiful.” — Kevin Wilson, author of New York Times bestseller Nothing to See Here

"Few books treat history as part of the natural fabric of life rather than a murky backdrop; this is one of them. The Vietri Project establishes Nicola DeRobertis-Theye as a contemporary of questing writers like Teju Cole and Rachel Cusk." — Karan Mahajan, author of National Book Award finalist, The Association of Small Bombs

“The Vietri Project deftly captures the desires and difficulties we face when resolving the many threads of the past—personal, familial, cultural—into a life we can call our own. A cool, precise, and elegant book—I was totally mesmerized by it.”  — Alexandra Chang, author of Days of Distraction

“Recommended for thoughtful readers who appreciate both the interior and exterior journey." — Booklist