I Marched with Patton: A Firsthand Account of World War II Alongside One of the U.S. Army's Greatest Generals (Hardcover) 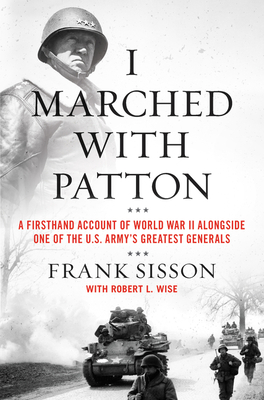 In December 1944, Frank Sisson deployed to Europe as part of General George S. Patton’s famed Third Army. Over the next six months, as the war in Europe raged, Sisson would participate in many of World War II’s most consequential events, from the Battle of the Bulge to the liberation of Dachau. Now 95 years old, Frank shares his remarkable story of life under General Patton for the first time.

Frank Sisson grew up in rural Oklahoma during the Great Depression. His father died when Frank was young, and so in 1944, at age eighteen, Frank, like so many other young men across America, enlisted in the Army and was deployed to France. At a traffic intersection one day, Frank caught his first glimpse of the man who would control the next six months of Frank’s deployment, and whose lessons, and spirit, would shape the rest of Frank’s life. General Patton could be erratic and short-tempered—but he was also a brilliant military tactician and cared deeply for the men who served under him, a credo that gave Frank and his fellow soldiers solace as they faced death every day. In this gritty, intimate account, Frank reveals what life on the ground was really like in the closing days of World War II.

After the war, Frank continued to serve in the army as a military police inspector in Berlin. When he finally returned home, he attended college and built a career in business. Like many members of the Greatest Generation, he was often reluctant to share his stories of the war, in all their glory, and terror. He was content to live and work in the nation he had fought to protect, an embodiment of the American Dream.

Patton, on the other hand, would not live to see the postwar world he helped create. In December 1945, less than a year after the conclusion of the war, he tragically died following a car accident. Now, seventy-five years later, Frank Sisson’s remarkable reminiscences provide a fresh, unique look at Patton’s leadership, the final days of World War II and its direct aftermath, and the experience of combat on the front lines.

Frank Sisson was born in 1925. In 1944, he deployed to France with the 667th Field Artillery. As a sergeant, he participated in much of the most significant fighting of the later war, including the Battle of the Bulge. After the war, he served as a military police inspector in Berlin. He lives in Oklahoma City.

"Poignant. ... Well worth the read. ... A firsthand account of the turmoil and destruction in France in December 1944 and later, on the road to Germany. ... [Sisson] has an eloquence that belies the fact that he left school at 15 to support his family."
— Wall Street Journal

"Vivid. ... Compelling. ... Not many military veterans in 2020 can look you straight in the eye and say 'I marched with Patton'—but Frank Sisson can."
— Newsmax