Sorrow and Bliss: A Novel (Hardcover) 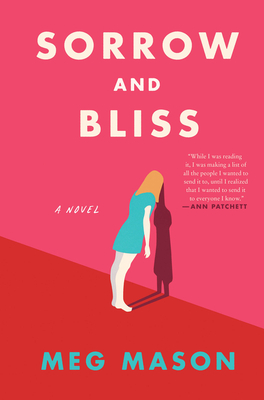 Forty year old Martha Friel is beautiful, clever, and painfully awkward. She is also dealing with mental illness that has been misdiagnosed for years. The story begins as Martha’s devoted husband, Patrick, is leaving her just after her birthday party, which he planned and threw. We then flash back to when she was 17 and her already unusual life took a dramatic turn. Meg Masons writing ranges smoothly from funny to heartbreaking as it deals with family issues, mental health, love, and life’s ups and downs. A very enjoyable read.

"Brutal, tender, funny. . . . I saw myself here. I saw the people I love. I am changed by this book." –Mary Beth Keane, New York Times bestselling author of Ask Again, Yes

A compulsively readable debut novel—spiky, sharp, intriguingly dark, and tender—about a woman on the edge that combines the psychological insight of Sally Rooney with the sharp humor of Nina Stibbe and the emotional resonance of Eleanor Oliphant Is Completely Fine.

Martha Friel just turned forty. Once, she worked at Vogue and planned to write a novel. Now, she creates internet content. She used to live in a pied-à-terre in Paris. Now she lives in a gated community in Oxford, the only person she knows without a PhD, a baby or both, in a house she hates but cannot bear to leave. But she must leave, now that her husband Patrick—the kind who cooks, throws her birthday parties, who loves her and has only ever wanted her to be happy—has just moved out.

Because there’s something wrong with Martha, and has been for a long time. When she was seventeen, a little bomb went off in her brain and she was never the same. But countless doctors, endless therapy, every kind of drug later, she still doesn’t know what’s wrong, why she spends days unable to get out of bed or alienates both strangers and her loved ones with casually cruel remarks.

And she has nowhere to go except her childhood home: a bohemian (dilapidated) townhouse in a romantic (rundown) part of London—to live with her mother, a minorly important sculptor (and major drinker) and her father, a famous poet (though unpublished) and try to survive without the devoted, potty-mouthed sister who made all the chaos bearable back then, and is now too busy or too fed up to deal with her.

But maybe, by starting over, Martha will get to write a better ending for herself—and she’ll find out that she’s not quite finished after all.

Born in New Zealand, MEG MASON began her career at the Financial Times in London before switching to The Times to write on lifestyle, parenting and humour. After relocating to Australia, she continued to write for a range of publications that include the Sydney Morning Herald, Cosmopolitan and GQ. She lives with her husband and two daughters in Sydney.

"Sorrow and Bliss is a brilliantly faceted and extremely funny book about depression that engulfed me in the way I'm always hoping to be engulfed by novels. While I was reading it, I was making a list of all the people I wanted to send it to, until I realized that I wanted to send it to everyone I know."
— Ann Patchett

"An incredibly funny and devastating debut. . . . enlivened, often, by a madcap energy. Yet it still manages to be sensitive and heartfelt, and to offer a nuanced portrayal of what it means to try to make amends and change, even when that involves 'start[ing] again from nothing.'”
— The Guardian

“Mason excels in her heartbreaking U.S. debut, an account of a woman’s self-discovery amid her struggle with mental illness. . . . Witty and stark, Martha’s emotionally affecting story will delight fans of Sally Rooney.”
— Publishers Weekly (starred review)

"Exploring the multifaceted hardships of mental illness and the frustrating inaccuracy of diagnoses, medications, and treatments, Sorrow and Bliss is darkly comic and deeply heartfelt . . . Martha’s voice is acerbic, witty, and raw."
— Booklist (starred review)

"Brutal, tender, funny, this novel—a portrait of love in all of its many incarnations—came alive for me from the very first page. I saw myself here. I saw the people I love. I am changed by this book."
— Mary Beth Keane, New York Times bestselling author of Ask Again, Yes

“Sorrow and Bliss is hilarious, haunting, and utterly captivating. Meg Mason has created a heroine as prickly as Bernadette in Where’d You Go, Bernadette. Her humor is as arch and wise as the best work of Joan Didion and Rachel Cusk, yet completely original. What a thrilling new voice!”
— Amanda Eyre Ward, New York Times bestselling author of The Jetsetters

"So dark, so funny, so true. You will see your sad, struggling, triumphant self in this deeply affecting novel. What a debut."
— Laura Zigman, author of Separation Anxiety

“Examines with pitiless clarity the impact of the narrator's mental illness on her closest relationships. . . . Mason brings the reader into a deep understanding of Martha's experience without either condescending to her or letting her off too easily. . . . An astute depiction of life on the psychic edge.”
— Kirkus Reviews

“The book is a triumph. A brutal, hilarious, compassionate triumph.”
— Alison Bell, cocreator and star of The Letdown

"This is a romance, true, but a real one. It’s modern love up against the confusing, sad aches of mental illness, with all its highs, lows, humour and misery. Comparisons to Sally Rooney will be made, but Mason’s writing is less self-conscious than Rooney’s, and perhaps more mature. Her character work is outstanding, and poignant—the hairline fractures, contradictions and nuances of the middle-class family dynamic are painstakingly rendered with moving familiarity and black humour, resulting in a combination as devastating and sharply witty as Phoebe Waller-Bridge’s Fleabag."
— Bookseller+Publisher