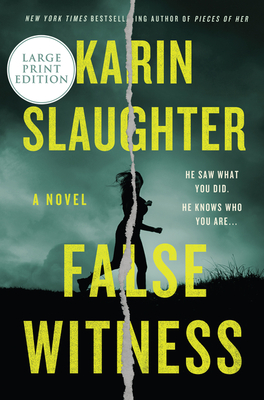 "There's deception, sabotage, violence, family secrets . . . all the stuff you could want from a fictional page-turner."— theSkimm

He saw what you did. He knows who you are…

From the New York Times bestselling author of Pieces of Her and The Silent Wife, an electrifying standalone thriller.

Leigh Collier has worked hard to build what looks like a normal life. She’s an up-and-coming defense attorney at a prestigious law firm in Atlanta, would do anything for her sixteen-year-old daughter Maddy, and is managing to successfully coparent through a pandemic after an amicable separation from her husband Walter.

HIDES A DEVASTATING PAST...

But Leigh’s ordinary life masks a childhood no one should have to endure … a childhood tarnished by secrets, broken by betrayal, and ultimately destroyed by a brutal act of violence.

BUT NOW THE PAST IS CATCHING UP…

On a Sunday night at her daughter’s school play, she gets a call from one of the firm's partners who wants Leigh to come on board to defend a wealthy man accused of multiple counts of rape. Though wary of the case, it becomes apparent she doesn't have much choice if she wants to keep her job. They're scheduled to go to trial in one week. When she meets the accused face-to-face, she realizes that it’s no coincidence that he’s specifically asked for her to represent him. She knows him. And he knows her. More to the point, he may know what happened over twenty years ago, and why Leigh has spent two decades avoiding her past.

AND TIME IS RUNNING OUT.

Suddenly she has a lot more to lose than this case. The only person who can help is her younger, estranged sister Callie—the last person Leigh would ever want to drag into this after all they’ve been through. But with the life-shattering truth in danger of being revealed, she has no choice...

“A high-stakes thriller . . . Her heroines are believable, flawed and courageous.” –OYINKAN BRAITHWAITE

Karin Slaughter is one of the world’s most popular and acclaimed storytellers. Published in 120 countries with more than 40 million copies sold across the globe, her twenty-one novels include the Grant County and Will Trent books, as well as the Edgar-nominated Cop Town and the instant New York Times bestselling stand-alone novels Pretty Girls, The Good Daughter, and Pieces of Her. Slaughter is the founder of the Save the Libraries project—a nonprofit organization established to support libraries and library programming. A native of Georgia, she lives in Atlanta. Her standalone novel Pieces of Her is in production with Netflix, starring Toni Collette, and the Grant County and Will Trent series are in development for television.

"Annnnd she does it again. Slaughter's latest high-stakes thriller follows a defense attorney whose dark past is coming back to haunt her — all thanks to a new client she's called in to represent days before his trial. There's deception, sabotage, violence, family secrets . . . all the stuff you could want from a fictional page-turner, really."
— theSkimm on False Witness

“Slaughter offers us a high-stakes thriller that handles the tragedy of addiction with empathy and grace. Her heroines are believable, flawed and courageous.”
— Oyinkan Braithwaite, award-winning author of My Sister, The Serial Killer, on False Witness

“Karin Slaughter’s False Witness is a twisty, searingly contemporary mystery steeped in a dark past, and she weaves a story that catches your breath and keeps you gasping and guessing until the end.”
— Stacey Abrams, author of While Justice Sleeps

"Slaughter doesn’t save her twists for the end, instead peppering them throughout the intricately layered story amid stomach-churning near misses and gripping character revelations. Equal parts hyperrealistic thriller and epic tragedy, Slaughter’s latest is pitch-perfect storytelling."
— Booklist (starred review) on False Witness

"[False Witness] will keep readers transfixed. Slaughter is writing at the top of her game."
— Publishers Weekly (starred review) on False Witness

“Slaughter skillfully and assuredly relates the violence of a sociopath, while creating an emotional connection to lives touched by tragedy and addressing current events.”
— Library Journal on False Witness

"Slaughter reliably delivers high-stakes thrillers, but False Witness is the author at her best, weaving a multi-layered, addictive story with characters you won’t soon forget."
— The Augusta Chronicle on False Witness

"In the enthralling False Witness, Slaughter ramps up her storytelling skills to explore how two sisters cope with the aftermath of a crime. False Witness works well as a psychological exploration of its characters, as a legal thriller and as a family drama. . . . Slaughter’s mastery at suspense is at full throttle . . . A thriller that kicks into high gear from the first page to a stunning ending."
— Sun-Sentinel (South Florida) on False Witness

“Karin Slaughter is a master of the thriller genre and her genius comes through on every page, in every character, through every plot twist. False Witness is so suspenseful, it’s tension palpable, and the action so visual, I can’t wait to see its brilliance in film.”
— Francesca Momplaisir, critically-acclaimed author of My Mother’s House

"Written during the pandemic, False Witness, a standalone thriller by bestselling author Karin Slaughter, tackles many issues exacerbated and spotlighted during Covid like food insecurity, the housing crisis, inmate treatment in prison, racism, misogyny, and the overwhelming demands on women. Leigh, a female defense attorney whose latest client's engagement wasn't exactly a coincidence and, in fact, requires her to get him acquitted or risk her own secrets being exposed, will surely find her own place on the screen like the protagonist of Slaughter's bestselling novel Pieces of Her, coming soon to Netflix."
— GMA.com

"Slaughter has written a wickedly sharp and arresting tour de force that blends a riveting plot and emotional subterfuge with the kind of propulsive prose that makes False Witness absolutely unputdownable."
— Lauren Francis-Sharma, author of Book of the Little Axe, on False Witness

"A shared secret comes back haunt two sisters who are forced to confront a dark and terrifying reality. Rich characters and deft plotting make this an unputdownable story that will move you to the core. This is Slaughter's best yet."
— Camilla Läckberg, internationally bestselling author, on False Witness

"Slaughter’s latest stand-alone could very well be one of your favorite books of 2021 . . . It delivers on so many levels—from the gut-punch of the first chapter through to the heartbreaking last page—this is Slaughter at her very best."
— Seattle Book Review on False Witness

“All of Slaughter’s books . . . are satisfyingly surprising and plausible, but it’s Slaughter’s prodigious gifts of characterization that make her stand out among thriller writers.”

“Slaughter’s eye for detail and truth are unmatched.”
— Gillian Flynn

“Her talent is the equivalent of an Edgar Allan Poe or a Nathaniel Hawthorne . . . An exemplary storyteller, weaving her words with skill and intelligence. She will be recognized as one of the great talents of the 21st century and will hold an honored place in the realm of world literature.”
— The Huffington Post

“[The Last Widow] does what all great Slaughter books do: keeps you on the edge of your seat. It’s a chilling whodunit for our times.”
— Parade on The Last Widow

“There’s never a dull moment in Georgia with Karin Slaughter on the literary rampage.”
— Washington Post on The Last Widow

“Slaughter’s work is like a professional athlete coming to the playground to show the kids how it’s done. With her themes, tensions and metaphors, she has a talent for classic literature that is often missing in recent fiction.”
— RT Book Reviews