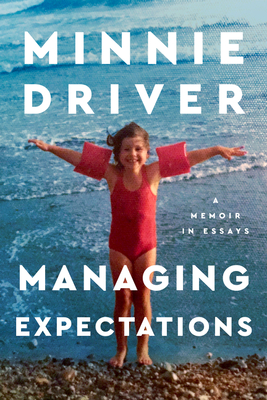 I loved reading stories from Minnie’s life— from her early childhood through recent life, including the passing of her mom during COVID. Minnie is real; her writing is as if having her tell you something while standing in front of you. Talented in so many ways, she can now add the role of author to be proud of! Don’t miss this one!

A charming, poignant, and mesmerizing memoir in essays from beloved actor and natural-born storyteller Minnie Driver, chronicling the way life works out even when it doesn’t.

In this intimate, beautifully crafted collection, Driver writes with disarming charm and candor about her bohemian upbringing between England and Barbados; her post-university travails and triumphs—from being the only student in her acting school not taken on by an agent to being discovered at a rave in a muddy field in the English countryside; shooting to fame in one of the most influential films of the 1990s and being nominated for an Academy Award; and finding the true light of her life, her son. She chronicles her unconventional career path, including the time she gave up on acting to sell jeans in Uruguay, her journey as a single parent, and the heartbreaking loss of her mother.

Like Lena Dunham in Not That Kind of Girl, Gabrielle Union in We’re Going to Need More Wine and Patti Smith in Just Kids, Driver writes with razor-sharp humor and grace as she explores navigating the depths of failure, fighting for success, discovering the unmatched wonder and challenge of motherhood, and wading through immeasurable grief. Effortlessly charming, deeply funny, personal, and honest, Managing Expectations reminds us of the way life works out—even when it doesn’t.

Minnie Driver is an English and American actress, singer, and songwriter whose films include Circle of Friends, GoldenEye, Big Night, Grosse Pointe Blank, Sleepers, Ella Enchanted, The Phantom of the Opera, and most recently, the Amazon Original film Cinderella. For her role as Skylar in Gus Van Sant's Good Will Hunting, she was nominated for both the Academy Award for Best Supporting Actress and a Screen Actors Guild Award. She has also starred in several television series, including The Riches, for which she received Emmy and Golden Globe nominations, Speechless, Will and Grace, and Amazon’s Modern Love. She has also recorded three albums, Everything I’ve Got in My Pocket , Seastories, and Ask Me To Dance all of which received considerable critical acclaim. She lives in Los Angeles.

"We have all been charmed by Minnie Driver on the screen, but it’s a divine pleasure to learn the woman behind some of our most beloved characters is a writer of true precision, wit and style who has had a life more compelling than any movie. This book will be a companion to those struggling to make sense of their own story and a clarion call to mothers (of all kinds) grappling with their identity. I was comforted, galvanized, touched and - no surprise considering the author - charmed, too. — Lena Dunham

“To reveal oneself in a manner that is at once poignant and fiercely intelligent while also being funny, warm, and genuine, is quite a feat. Minnie Driver shows us she is even more than what’s met the eye all these years. Simply put: I love this book!” — Therese Ann Fowler, author of A Good Neighborhood and  Z: A Novel of Zelda Fitzgerald

“Actor Driver parlays her ebullient charm from the screen to the page in this sparkling debut, a series of amusing essays on Hollywood, motherhood, and the vicissitudes of life… Humorous and heartfelt, this is sure to please fans.” — Publishers Weekly

“[Managing Expectations] reflects an actor’s close attention to strange, exasperating, heartbreaking behavior all around her, conveyed with wit and poise.” — USA Today