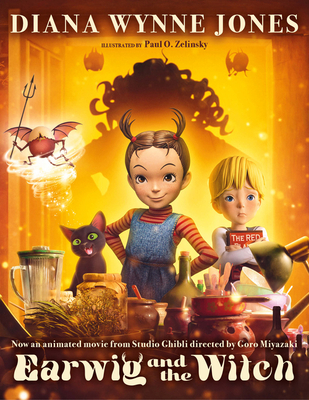 If you aren't afraid of witches and demons, this the perfect book for you! Earwig is perfectly happy not being adopted because she bosses everyone around. But when a witch and demon choose her to adopt, will their magic be too powerful for her demands? I love how I thought Earwig was a brat until I saw just how big her heart really is!

Read the book that inspired the full-length animated feature produced by the legendary Studio Ghibli and directed by Goro Miyazaki.

Not every orphan would love living at St. Morwald's Home for Children, but Earwig does. She gets whatever she wants, whenever she wants it, and it's been that way since she was dropped on the orphanage’s doorstep as a baby. But all that changes the day Bella Yaga and the Mandrake come to St. Morwald's, disguised as foster parents.

Earwig is whisked off to their mysterious house full of invisible rooms, potions, and spell books, with magic around every corner. Most children would run in terror from a house like that . . . but not Earwig. Using her own cleverness—with a lot of help from a talking cat—she decides to show the witch who's boss.

“I would like to declare Diana Wynne Jones an international treasure," Neil Gaiman, Newbery Medal–winning and best-selling author

In a career spanning four decades, award-winning author Diana Wynne Jones (1934‒2011) wrote more than forty books of fantasy for young readers. Characterized by magic, multiple universes, witches and wizards—and a charismatic nine-lived enchanter—her books are filled with unlimited imagination, dazzling plots, and an effervescent sense of humor that earned her legendary status in the world of fantasy.

Paul O. Zelinsky is the illustrator of Anne Isaac's Dust Devil and creator of the now-classic interactive book called The Wheels on the Bus. His retelling of Rapunzel was awarded the 1998 Caldecott Medal. Rumpelstitlskin, Hansel and Gretel and Swamp Angel with different authors all garnered Paul a Caldecott Honor. Since 1991 Paul O. Zelinsky has lived in the same apartment with his wife Deborah in northern Brooklyn, New York.

“This funny story updates fairy tale conventions while highlighting Jones’s subversive wit and her firm belief that children can control their own lives. … A fine introduction to the late author’s more complex YA novels.” — Publishers Weekly (starred review)

“With this enthralling book, Jones proves that she is still at the top of her game.” — Booklist (starred review)

“Earwig is a plucky, bossy heroine, and the story is packed with with and humor. Zelinsky’s illustrations enhance this imaginative tale.” — School Library Journal

“Readers are treated to a nonstop plot, memorable characters, and signature DWJ touches … An accessible page design incorporates Zelinsky’s plentiful line illustrations, the best of which are showstoppers.” — The Horn Book

“A refreshing change of pace for young fantasy fans.” — Booklist

“Jones brings her characteristic witty humor and rich imagination to a whimsical chapter book that would undoubtedly delight as a readaloud. Stubborn and mischievous, Earwig is a likable, albeit irascible, heroine, and her triumph at the witch’s expense will elicit plenty of cheerful howls.” — Bulletin of the Center for Children’s Books