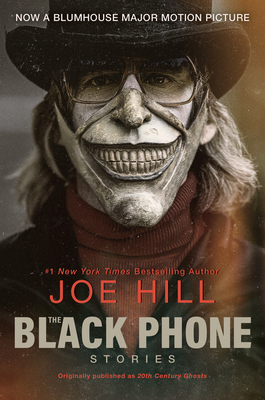 Jack Finney is thirteen, alone, and in desperate trouble. For two years now, someone has been stalking the boys of Galesberg, stealing them away, never to be seen again. And now, Finney finds himself in danger of joining them: locked in a psychopath’s basement, a place stained with the blood of half a dozen murdered children.

With him in his subterranean cell is an antique phone, long since disconnected . . . but it rings at night anyway, with calls from the killer’s previous victims. And they are dead set on making sure that what happened to them doesn’t happen to Finney.

“The Black Phone” is one of fifteen stories in Joe Hill’s first story collection, originally published as 20th Century Ghosts—the inventive and chilling compendium that established this award-winning, critically acclaimed, and bestselling author as “a major player in 21st-century fantastic fiction” (Washington Post).

Joe Hill is the #1 New York Times bestselling author of the novels The Fireman, NOS4A2, Horns, and Heart-Shaped Box; Strange Weather, a collection of novellas; and the acclaimed story collections Full Throttle and 20th Century Ghosts. He is also the Eisner Award–winning writer of a seven-volume comic book series, Locke & Key. Much of his work has been adapted for film and TV, including NOS4A2 (AMC), Locke & Key (Netflix), and In the Tall Grass (Netflix).

“The collection of short stories ranges from creepy to sweet, with an impressive arsenal of tactics to attack your psyche.” — Boston Globe

“Alternately sad, scary, strange and at times even sweet, these tales will haunt you long after you’ve read them.” — Parade

“[O]ne of the best [horror] collections of the year. Hill is a relative newcomer who consistently creates creepy, very disturbing stories.” — Locus

“Each tale is unique, and the collection proves that Hill’s talent is not limited to horror, but extends well into the mainstream.” — Denver Rocky Mountain News

“[A] new take on the fantasy-horror genre...Highly recommended.” — The Sun Herald (Sydney, Australia)

“The selections range from the mundane to the surreal, with a strong emphasis on the kind of horror tale perfected by Ray Bradbury, Peter Straub and Stephen King.” — San Francisco Chronicle

“This solid, inventive, scary collection of stories reveals a writer who has thought hard about the problematics of horror.” — New York Times on 20TH CENTURY GHOSTS

“Each of these chilling tales arrests you from the opening sentence and leads you — trustingly, thanks to the simple mastery of the story-teller — into a place of gulping fear.” — Daily Mail (London) on 20TH CENTURY GHOSTS