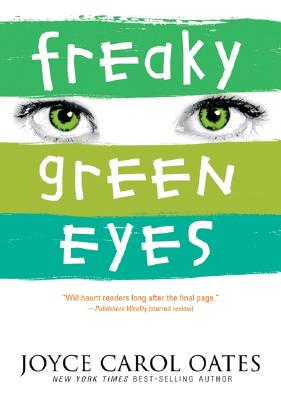 By Joyce Carol Oates
$10.99
Email or call for price

Sometimes Franky Pierson has a hard time dealing with life. Like when her parents separate and her mother vanishes, Franky wants to believe that her mom has simply pulled a disappearing act. Yet deep within herself, a secret part of her she calls Freaky Green Eyes knows that something is terribly wrong. And only Freaky can open Franky's eyes to the truth.

Joyce Carol Oates is a recipient of the National Medal of Humanities, the National Book Critics Circle Ivan Sandrof Lifetime Achievement Award, the National Book Award, and the 2019 Jerusalem Prize, and has been several times nominated for the Pulitzer Prize. She has written some of the most enduring fiction of our time, including the national bestsellers We Were the Mulvaneys; Blonde, which was nominated for the National Book Award; and the New York Times bestseller The Falls, which won the 2005 Prix Femina. She is the Roger S. Berlind Distinguished Professor of the Humanities at Princeton University and has been a member of the American Academy of Arts and Letters since 1978.

“Moves along at the breathless pace” — BookPage

“A fast-paced, first-person thriller” — ALA Booklist

“Among this year’s most compelling fiction” — Boston Herald