Too Much Information: Or: Can Everyone Just Shut Up for a Moment, Some of Us Are Trying to Think (Paperback) 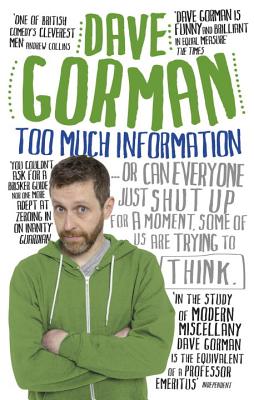 By Dave Gorman
Email or call for price.
Special Order

Award-winning comedian Dave Gorman thinks we're suffering from information overload. How much do we really pay attention to? What happens if you stop and try to take it all in? Dave intends to find out.
It's hard to imagine a world where anything you could possibly want to know about--and everything you don't even know you want to know about--isn't accessible 24 hours a day, seven days a week, with just a few taps of our fingers. But that world once existed. And Dave Gorman remembers it. He remembers when there were only three channels on TV. He remembers when mobile phones were the preserve of arrogant estate agents and yuppie twonks. And he remembers when you had to unplug your phone to plug the computer into the landline in order to use the (cripplingly slow) internet. Nowadays of course, the world is full of people trying to tell us things. So much so that we have taught our brains not to pay much attention. After all, click the mouse, tap the screen, flick the channel, and it's on to the next thing. But Dave Gorman thinks it's time to have a closer look, to find out how much nonsense we tacitly accept. Suspicious ads, baffling newspaper headlines, fake Twitter, endless cat videos, insane TV shows where the presenters ask the same questions over and over--can we even hear ourselves think over the rising din? Or is there just too much information?

Dave Gorman is an award-winning comedian, storyteller, and writer. His live shows have won many awards and he is the only performer to twice win the Jury Prize for Best One Person Show at the prestigious HBO US Comedy Arts Festival. He has appeared in such TV shows as Absolutely Fabulous, Late Show with David Letterman, The Tonight Show with Jay Leno, and The Daily Show with Jon Stewart. His documentary film, America Unchained, won the Audience Award for Best Documentary Feature at the Austin Film Festival. He is the author of Dave Gorman's Googlewhack Adventure.