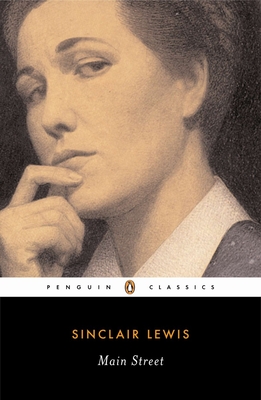 Sinclair Lewis's barbed portrait of Gopher Prairie, Minnesota, shattered the myth of the American Middle West as God's Country and became a symbol of the cultural narrow-mindedness and smug complacency of small towns everywhere.

At the center of Main Street is Carol Kennicott, the wife of a town doctor, who dreams of initiating social reforms and introducing art and literature to the community. The range of reactions when it was published in 1920 was extraordinary, reflecting the ambivalence in the novel itself and Lewis's own mixed feelings about his hometwon of Sauk Centre, Minnesota, the prototype for Gopher Prairie.

Sinclair Lewis (1885-1951) was born in Sauk Centre, Minnesota, and graduated from Yale University in 1908. His college career was interrupted by various part-time occupations, including a period working at the Helicon Home Colony, Upton Sinclair’s socialist experiment in New Jersey. He worked for some years as a freelance editor and journalist, during which time he published several minor novels. But with the publication of Main Street (1920), which sold half a million copies, he achieved wide recognition. This was followed by the two novels considered by many to be his finest, Babbitt (1922) and Arrowsmith (1925), which was awarded the Pulitzer Prize in 1926, but declined by Lewis. In 1930, following Elmer Gantry (1927) and Dodsworth (1929), Sinclair Lewis became the first American author to be awarded the Nobel Prize for distinction in world literature. This was the apogee of his literary career, and in the period from Ann Vickers (1933) to the posthumously published World So Wide (1951) Lewis wrote ten novels that reveal the progressive decline of his creative powers. From Main Street to Stockholm, a collection of his letters, was published in 1952, and The Man from Main Street, a collection of essays, in 1953. During his last years Sinclair Lewis wandered extensively in Europe, and after his death in Rome, his ashes were returned to his birthplace.

By the Winner of the Nobel Prize in Literature