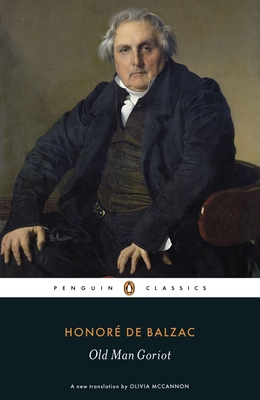 Monsieur Goriot is one of a disparate group of lodgers at Mademe Vauquer's dingy Parisian boarding house. At first his wealth inspires respect, but as his circumstances are mysteriously reduced he becomes shunned by those around him, and soon his only remaining visitors are his two beautifully dressed daughters. Goriot's fate is intertwined with two other fellow boarders: the young social climber Eugene Rastignac, who sees a way to gain the acceptance and wealth he craves, and the enigmatic figure of Vautrin, who is hiding darker secrets than anyone. Weaving a compelling and panoramic story of love, money, self-sacrifice, corruption, greed and ambition, Old Man Goriot is Balzac's acknowledged masterpiece. A key novel in his Comédie Humaine series, it is a vividly realized portrait of bourgeois Parisian society in the years following the French Revolution.

The son of a civil servant, Honoré de Balzac was born in 1799 in Tours, France. After attending boarding school in Vendôme, he gravitated to Paris where he worked as a legal clerk and a hack writer, using various pseudonyms, often in collaboration with other writers. Balzac turned exclusively to fiction at the age of thirty and went on to write a large number of novels and short stories set amid turbulent nineteenth-century France. He entitled his collective works The Human Comedy. Along with Victor Hugo and Dumas père and fils, Balzac was one of the pillars of French romantic literature. He died in 1850, shortly after his marriage to the Polish countess Evelina Hanska, his lover of eighteen years.

Graham Robb is the author of three prize-winning biographies, each one selected as New York Times Best Books. His most recent works, The Discovery of France and Parisians, have earned several awards and much acclaim between them. He lives on the Anglo-Scottish border.