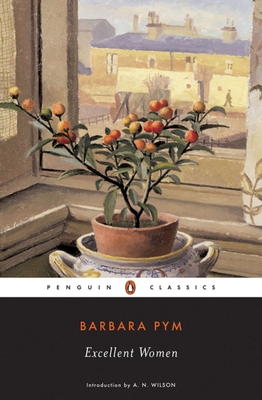 “The finest introduction to Barbara Pym” (The New York Times): a hilarious comedy of manners by the shrewdly observant British novelist often compared to Jane Austen

One of Barbara Pym’s richest and most amusing high comedies, Excellent Women has at its center Mildred Lathbury, a clergyman’s daughter and a mild-mannered spinster in 1950s England. She is one of those “excellent women,” the smart, supportive, repressed women who men take for granted. As Mildred gets embroiled in the lives of her new neighbors—anthropologist Helena Napier and her handsome, dashing husband, Rocky, and Julian Malory, the vicar next door—the novel presents a series of snapshots of human life as actually, and pluckily, lived in a vanishing world of manners and repressed desires.

Barbara Pym (1913–1980) was a British novelist best known for her series of satirical novels on English middle-class society. A graduate of St. Hilda’s College, Oxford, Pym published the first of her nine novels, Some Tame Gazelle, in 1950, followed by five more books. Despite this early success and continuing popularity, Pym went unpublished from 1963 to 1977. Her work was rediscovered after a famous article in the Times Literary Supplement in which two prominent names, Lord David Cecil and Philip Larkin, nominated Pym as the most underrated writer of the century. Her comeback novel, Quartet in Autumn, was nominated for the Booker Prize.

A. N. Wilson (introducer) was born in 1950 and educated at Rugby School and New College, Oxford. A fellow of the Royal Society of Literature, he has held a prominent position in the world of literature and journalism, winning prizes for much of his work and contributing to the London Even Standard, Times Literary Supplement, New Statesman, Spectator, Observer, and Daily Mail, among others. He lives in London.

“Beneath the gentle surfaces of [Pym's] novels is a slow-building comedy, salt wit in a saline drip. . . . Her work offers the reassurance that we are all as bad and as good, as prickly and as resilient, as any Evensong attendee. It is a useful gratification in grating times.” —The New York Times

“A startling reminder that solitude may be chosen and that a lively, full novel can be constructed entirely within the precincts of that regressive virtue, feminine patience.” —John Updike, The New Yorker

“[One of] the finest examples of high comedy to have appeared in England during the past seventy-five years.” —Lord David Cecil