The Secret Scripture: A Novel (Paperback) 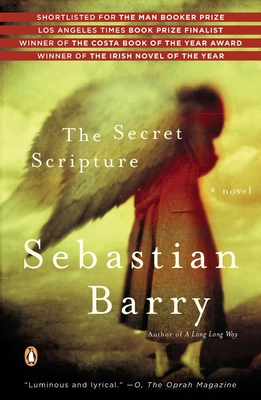 By Sebastian Barry
$17.00
Email or call for price.

“This is a haunting story of memory and how seemingly small decisions can have large consequences. As 100-year-old Roseanne, a patient in a mental institution, tries to reconstruct her life, she realizes that memory is not always reliable, and that truth may not be attainable. In addition to offering readers characters with grace and writing that is mesmerizing, The Secret Scripture invites discussions about what 'truth' is and how cultural circumstances and individual choices define a life.”
— Rona Brinlee, The Book Mark, Atlantic Beach, FL

“Barry's novel of Roseanne McNulty, now in her hundredth year in an Irish mental hospital, is a haunting story of memory and how small decisions can have large consequences. The writing was such a treat that I actually got to the last page late one night and saved it until the next morning. I didn't want to read it until I was fully awake and could relish the end.”
— Rona Brinlee, The Book Mark, Atlantic Beach, FL

Sebastian Barry's novels have been hugely admired by readers and critics, and in 2005 his novel A Long Long Way was shortlisted for the Man Booker Prize. In The Secret Scripture, Barry revisits County Sligo, Ireland, the setting for his previous three books, to tell the unforgettable story of Roseanne McNulty. Once one of the most beguiling women in Sligo, she is now a resident of Roscommon Regional Mental Hospital and nearing her hundredth year. Set against an Ireland besieged by conflict, The Secret Scripture is an engrossing tale of one woman's life, and a poignant story of the cruelties of civil war and corrupted power. The Secret Scripture is now a film starring Rooney Mara, Eric Bana, and Vanessa Redgrave.

Sebastian Barry was born in Dublin in 1955. His plays include Boss Grady's Boys (1988), The Steward of Christendom (1995), Our Lady of Sligo (1998), The Pride of Parnell Street (2007), and Dallas Sweetman (2008). Among his novels are The Whereabouts of Eneas McNulty (1998), Annie Dunne (2002) and A Long Long Way (2005), the latter shortlisted for the Man Booker Prize. His poetry includes The Water-Colourist (1982), Fanny Hawke Goes to the Mainland Forever (1989) and The Pinkening Boy (2005). His awards include the Irish-America Fund Literary Award, The Christopher Ewart-Biggs Prize, the London Critics Circle Award, The Kerry Group Irish Fiction Prize, and Costa Awards for Best Novel and Book of the Year. He lives in Wicklow with his wife Ali, and three children, Merlin, Coral, and Tobias.

"[Barry writes] in language of surpassing beauty. . . . It is like a song, with all the pulse of the Irish language, a song sung liltingly and plaintively from the top of Ben Bulben into the airy night." —Dinitia Smith, The New York Times

"Barry recounts all this in prose of often startling beauty. Just as he describes people stopping in the street to look at Roseanne, so I often found myself stopping to look at the sentences he gave her, wanting to pause and copy them down." —Margot Livesey, The Boston Globe

"Luminous and lyrical."—O, The Oprah Magazine

"A great novel about a ninety-nine-year-old woman...trying to understand the truth of her life...Along the way are some of the most beautifully formed prose passages I have ever read." —Thomas Cahill, author of How the Irish Saved Civilization

"Written in captivating, lyrical prose, Barry's novel is both a sparkling literary puzzle and a stark cautionary tale of corrupted power." —Publishers Weekly

"It is a poignant story of the horrors and hypocrisies of rural Ireland, the cruelties of civil war, and the pernicious influence of the priesthood. Roseanne is a vivid and engaging protagonist, and Barry makes rich use of the circumlocutions of his native tongue." —The Daily Mail (London)

"In this book, the worlds each character builds are significantly, tantalizingly estranged from each other. The novel's delight lies in the way in which the two tales—and, eventually the two lives—begin to coalesce, to the utter surprise of both the characters and the reader."
—The Economist