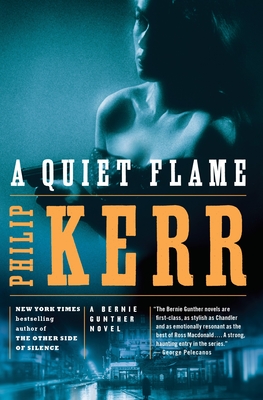 By Philip Kerr
Email or call for price

“The second Bernie Gunter novel after a 15 year absence finds the former Berlin detective in 1950 Buenos Aires, a city full of corruption, terrorism and a large community of escaped Germans. Falsely accused of war crimes before leaving Germany, Bernie is called upon to help solve a crime similar to one of his old, unsolved cases. Phillip Kerr is top notch.”
— Sue Richardson, Maine Coast Book Shop, Inc., Damariscotta, ME

Buenos Aires, 1950. After being falsely accused of war crimes, Bernie Gunther—like the Nazis he has always despised—has been offered a new life and a clean passport by the Perón government. But the tough, fast-talking ex-Berlin detective doesn’t have the luxury of laying low. The local police pressure Bernie into taking on a case in which a girl has turned up gruesomely mutilated. What’s more, her murder just might be linked to a missing German banker’s daughter and a long-unsolved case Bernie worked back in Berlin before the war. After all, the scum of the earth has been washing up on Argentina’s shores—state-licensed murderers and torturers—so why couldn’t a serial killer be among them?

Philip Kerr was the New York Times bestselling author of the acclaimed Bernie Gunther novels, three of which—Field Gray, The Lady from Zagreb, and Prussian Blue—were finalists for the Edgar Award for Best Novel. Kerr also won several Shamus Awards and the British Crime Writers’ Association Ellis Peters Award for Historical Crime Fiction. Just before his death in 2018, he was made a Fellow of the Royal Society of Literature. As P.B. Kerr, he was the author of the much-loved young adult fantasy series Children of the Lamp.

Praise for Philip Kerr and the Bernie Gunther Novels

“Philip Kerr is the only bona fide heir to Raymond Chandler.”—Salon.com

“In terms of narrative, plot, pace and characterization, Kerr’s in a league with John le Carré.”—The Washington Post

“Just as youth is wasted on the young, history is wasted on historians. It ought to be the exclusive property of novelists—but only if they are as clever and knowledgeable as Philip Kerr.”—Chicago Tribune

“Kerr quantum leaps the limitations of genre fiction. Most thrillers insult your intelligence; his assault your ignorance.”—Esquire

“A richly satisfying mystery, one that evokes the noir sensibilities of Raymond Chandler and Ross Macdonald while breaking important new ground of its own.”—Los Angeles Times

“Part of the allure of these novels is that Bernie is such an interesting creation, a Chandleresque knight errant caught in insane historical surroundings. Bernie walks down streets so mean that nobody can stay alive and remain truly clean.”—John Powers, Fresh Air (NPR)

“The Bernie Gunther novels are first-class, as stylish as Chandler and as emotionally resonant as the best of Ross Macdonald.”—George Pelecanos