The Plantagenets: The Warrior Kings and Queens Who Made England (Paperback) 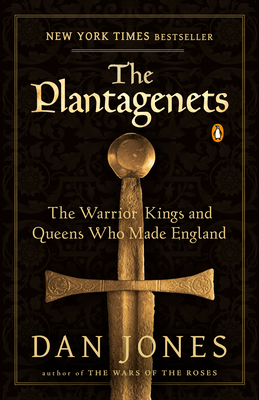 The New York Times bestseller, from the author of Crusaders, that tells the story of Britain’s greatest and worst dynasty—“a real-life Game of Thrones” (The Wall Street Journal)


The first Plantagenet kings inherited a blood-soaked realm from the Normans and transformed it into an empire that stretched at its peak from Scotland to Jerusalem. In this epic narrative history of courage, treachery, ambition, and deception, Dan Jones resurrects the unruly royal dynasty that preceded the Tudors. They produced England’s best and worst kings: Henry II and his wife Eleanor of Aquitaine, twice a queen and the most famous woman in Christendom; their son Richard the Lionheart, who fought Saladin in the Third Crusade; and his conniving brother King John, who was forced to grant his people new rights under the Magna Carta, the basis for our own bill of rights. Combining the latest academic research with a gift for storytelling, Jones vividly recreates the great battles of Bannockburn, Crécy, and Sluys and reveals how the maligned kings Edward II and Richard II met their downfalls. This is the era of chivalry and the Black Death, the Knights Templar, the founding of parliament, and the Hundred Years’ War, when England’s national identity was forged by the sword.

Dan Jones is the author of The Plantagenets: The Warrior Kings and Queen Who Made England, a #1 international bestseller and New York Times bestseller, and Wars of the Roses, which charts the story of the fall of the Plantagenet dynasty and the improbable rise of the Tudors. He writes and presents the popular Netflix series Secrets of Great British Castles. He is also the author of Magna Carta: The Birth of Liberty and Summer of Blood: England’s First Revolution and is working on a history of the Knights Templar due out in 2017.

Praise for The Plantagenets

“Like the medieval chroniclers he quarries for juicy anecdotes, Jones has opted for a bold narrative approach anchored firmly upon the personalities of the monarchs themselves yet deftly marshaling a vast supporting cast of counts, dukes, and bishops. . . . Fast-paced and accessible, The Plantagenets is old-fashioned storytelling and will be particularly appreciated by those who like their history red in tooth and claw. Mr. Jones tackles his subject with obvious relish.”
—The Wall Street Journal

“Jones has brought the Plantagenets out of the shadows, revealing them in all their epic heroism and depravity. His is an engaging and readable account—itself an accomplishment given the gaps in medieval sources and a 300-year tableau—and yet researched with the exacting standards of an academician. The result is an enjoyable, often harrowing journey through a bloody, insecure era in which many of the underpinnings of English kingship and ¬Anglo-American constitutional thinking were formed.”
—The Washington Post

“Brilliant and entertaining . . . a set of fine vignettes relating dynastic life, death, war, peace, governance, and palace intrigues. The result is a history book that frequently reads like a novel and can be opened to any chapter.”
—Tampa Bay Times

“They may lack the glamour of the Tudors or the majesty of the Victorians, but the Plantagenets are just as essential to the foundation of modern Britain. . . . The great battles against the Scots and French and the subjugation of the Welsh make for thrilling reading but so do the equally enthralling struggles over succession, the Magna Carta, and the Provisions of Oxford. . . . Written with prose that keeps the reader captivated throughout accounts of the span of centuries and the not-always-glorious trials of kingship, this book is at all times approachable, academic, and entertaining.”
—Booklist

“A novelistic historical account of the bloodline that ‘stamped their mark forever on the English imagination’ . . . Perhaps Jones’ regular column in the London Standard has given him a different slant on history; however he manages, it’s certainly to our benefit. . . . For enjoyable historical narratives, this book is a real winner.”
—Kirkus Reviews

“A riveting portrait of the royal lineage from Henry II through Richard II . . . Despite the density caused by any attempt to cram centuries of English history into one volume, Jones manages to create a work that is highly accessible to readers with only a basic knowledge of this era. . . . This is an excellent study of the period, both an overview and a series of character studies. It will be thoroughly enjoyed by Anglophile history buffs and others who love popular history or even historical fiction.”
—Library Journal

“Outstanding . . . Majestic in its sweep, compelling in its storytelling, this is narrative history at its best. A thrilling dynastic history of royal intrigues, violent skullduggery, and brutal warfare across two centuries of British history.”
—Simon Sebag Montefiore, author of Jerusalem: The Biography

“The Plantagenets played a defining part in shaping the nation of England, and Dan Jones tells their fascinating story with wit, verve, and vivid insight. This is exhilarating history—a fresh and gloriously compelling portrait of a brilliant, brutal, and bloody-minded dynasty.”
—Helen Castor, author of She-Wolves: The Women Who Ruled England before Elizabeth

“This is history at its most epic and thrilling. I would defy anyone not to be right royally entertained by it.”
—Tom Holland, author of Rubicon: The Triumph and Tragedy of the Roman Republic

“Jones has written a magnificently rich and glittering medieval pageant, guiding us into the distant world of the Plantagenets with confidence. This riveting history of an all-too-human ruling House amply confirms the arrival of a formidably gifted historian.”
—Sunday Telegraph

“Entertaining and informative . . . Jones has produced an absorbing narrative that will help ensure that the Plantagenet story remains ‘stamped on the English imagination’ for another generation.”
—Sunday Times (London)

“Traditional narrative history at its best.”
—The Spectator

“Jones, a protégé of David Starkey, writes with his mentor's erudition but also exhibits novelistic verve and sympathy. . . . This is a great popular history, whether you are au fait with the machinations of medievalism or whether Magna Carta mystifies you. . . . The Plantagenets is proof that contemporary history can engage with the medieval world with style, wit and chutzpah.”
—The Observer (London)

“This action-packed narrative is, above all, a great story, filled with fighting, personality clashes, betrayal and bouts of the famous Plantagenet rage. . . . Jones is an impressive guide to this tumultuous scene. . . . The Plantagenets succeeds in bringing an extraordinary family arrestingly to life.”
—Daily Telegraph

“An excellent book . . . The Plantagenets is a wonderful gallop through English history. Powerful personalities, vivid descriptions of battles and tournaments, ladies in fine velvet and knights in shining armour crowd the pages of this highly engaging narrative.”
—The Evening Standard