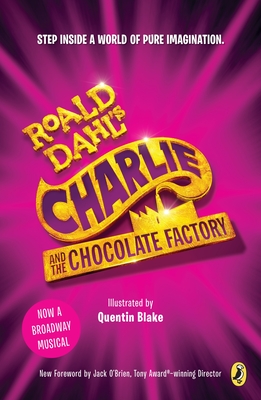 Roald Dahl's iconic story of a little boy, a golden ticket, and a fantastical chocolate factory has been adapted into a wonderful new musical. This edition has a great new cover featuring the musical's poster art and a foreword by Jack O'Brien, Tony Award-winning Director.

Willy Wonka's famous chocolate factory is opening at last! But only five lucky children will be allowed inside. And the winners are: Augustus Gloop, an enormously fat boy whose hobby is eating; Veruca Salt, a spoiled-rotten brat whose parents are wrapped around her little finger; Violet Beauregarde, a dim-witted gum-chewer with the fastest jaws around; Mike Teavee, a toy pistol-toting gangster-in-training who is obsessed with television; and Charlie Bucket, Our Hero, a boy who is honest and kind, brave and true, and good and ready for the wildest time of his life!

Roald Dahl was a spy, ace fighter-pilot, chocolate historian, and medical inventor. He was also the author of Charlie and the Chocolate Factory, Matilda, The BFG, and many more brilliant stories. He remains the World's No.1 Storyteller. Find out more at roalddahl.com.