The Scourge of War: The Life of William Tecumseh Sherman (Hardcover) 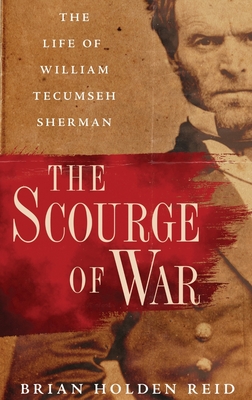 William Tecumseh Sherman, a West Point graduate and veteran of the Seminole War, became one of the best-known generals in the Civil War. His March to the Sea, which resulted in a devastated swath of the South from Atlanta to Savannah, cemented his place in history as the pioneer of total war. In The Scourge of War, preeminent military historian Brian Holden Reid offers a deeply researched life and times account of Sherman. By examining his childhood and education, his business ventures in California, his antebellum leadership of a military college in Louisiana, and numerous career false starts, Holden Reid shows how unlikely his exceptional Civil War career would seem. He also demonstrates how crucial his family was to his professional path, particularly his wife's intervention during the war. He analyzes Sherman's development as a battlefield commander and especially his crucial friendships with Henry W. Halleck and Ulysses S. Grant. In doing so, he details how Sherman overcame both his weaknesses as a leader and severe depression to mature as a military strategist. Central chapters narrate closely Sherman's battlefield career and the gradual lifting of his pessimism that the Union would be defeated. After the war, Sherman became a popular figure in the North and the founder of the school for officers at Fort Leavenworth, Kansas, known as the intellectual center of the army. Holden Reid argues that Sherman was not hostile to the South throughout his life and only in later years gained a reputation as a villain who practiced barbaric destruction, particularly as the neo-Confederate Lost Cause grew and he published one of the first personal accounts of the war. A definitive biography of a preeminent military figure by a renowned military historian, The Scourge of War is a masterful account of Sherman' life that fully recognizes his intellect, strategy, and actions during the Civil War.

Brian Holden Reid is Professor of American History and Military Institutions at King's College London. He is the author of Robert E. Lee: Icon of a Nation, The Civil War and the Wars of the Nineteenth Century, and America's Civil War: The Operational Battlefield, 1861-1863, among other books. In 2019, he was awarded the Samuel Eliot Morison Prize from the Society for Military History for his contributions to the field.