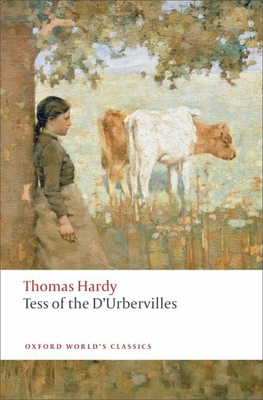 Young Tess Durbeyfield attempts to restore her family's fortunes by claiming their connection with the aristocratic d'Urbervilles. But Alec d'Urberville is a rich wastrel who seduces her and makes her life miserable. When Tess meets Angel Clare, she is offered true love and happiness, but her past catches up with her and she faces an agonizing moral choice.
Hardy's indictment of society's double standards, and his depiction of Tess as "a pure woman," caused controversy in his day and has held the imagination of readers ever since. Hardy thought it his finest novel, and Tess the most deeply felt character he ever created. This unique critical text is taken from the authoritative Clarendon edition, which is based on the manuscript collated with all Hardy's subsequent revisions. About the Series: For over 100 years Oxford World's Classics has made available the broadest spectrum of literature from around the globe. Each affordable volume reflects Oxford's commitment to scholarship, providing the most accurate text plus a wealth of other valuable features, including expert introductions by leading authorities, voluminous notes to clarify the text, up-to-date bibliographies for further study, and much more.