Rome's Revolution: Death of the Republic and Birth of the Empire (Ancient Warfare and Civilization) (Hardcover) 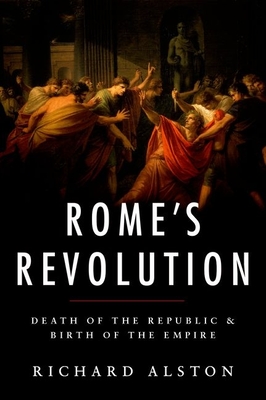 On March 15th, 44 BC a group of senators stabbed Julius Caesar, the dictator of Rome. By his death, they hoped to restore Rome's Republic. Instead, they unleashed a revolution. By December of that year, Rome was plunged into a violent civil war. Three men--Mark Antony, Lepidus, and Octavian--emerged as leaders of a revolutionary regime, which crushed all opposition. In time, Lepidus was removed, Antony and Cleopatra were dispatched, and Octavian stood alone as sole ruler of Rome. He became Augustus, Rome's first emperor, and by the time of his death in AD 14 the 500-year-old republic was but a distant memory and the birth of one of history's greatest empires was complete. Rome's Revolution provides a riveting narrative of this tumultuous period of change. Historian Richard Alston digs beneath the high politics of Cicero, Caesar, Antony, and Octavian to reveal the experience of the common Roman citizen and soldier. He portrays the revolution as the crisis of a brutally competitive society, both among the citizenry and among the ruling class whose legitimacy was under threat. Throughout, he sheds new light on the motivations that drove men to march on their capital city and slaughter their compatriots. He also shows the reasons behind and the immediate legacy of the awe inspiringly successful and ruthless reign of Emperor Augustus. An enthralling story of ancient warfare, social upheaval, and personal betrayal, Rome's Revolution offers an authoritative new account of an epoch which still haunts us today.

Richard Alston is Professor of Roman History at Royal Holloway, University of London, and the author or editor of over a dozen books on ancient Rome.