Naked Airport: A Cultural History of the World's Most Revolutionary Structure (Paperback) 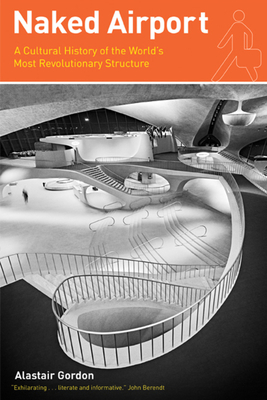 Although airports are now best known for interminable waits at check-in counters, liquid restrictions for carry-on luggage, and humiliating shoe-removal rituals at security, they were once the backdrops for jet-setters who strutted, martinis in hand, through curvilinear terminals designed by Eero Saarinen. In the critically acclaimed Naked Airport, Alastair Gordon traces the cultural history of this defining institution from its origins in the muddy fields of flying machines to its frontline position in the struggle against international terrorism.
From global politics to action movies to the daily commute, Gordon shows how the airport has changed our sense of time, distance, and style, and ultimately the way cities are built and business is done. He introduces the people who shaped and were shaped by this place of sudden transition: pilots like Charles Lindbergh, architects like Le Corbusier, and political figures like Fiorello LaGuardia and Adolf Hitler. Naked Airport is a profoundly original history of a long-neglected yet central component of modern life.

“This charming history documents why airports have always been such intriguing places. Gordon wittily deconstructs air terminal architecture. . . . Here is a book with more than enough quirky details to last a long layover.”—People

“Gordon, an architecture and design critic, tells his story well, bringing to life some of the main characters and highlighting some of the important issues concerning urbanism and airports.”—Michael Roth, San Francisco Chronicle

“Gordon provides a truly compelling account of how airports had over the course of three-quarters of a century become the locus of not only modern dreams but postmodern nightmares as well. Don’t leave home without it.”—Terence Riley, director of the Miami Art Museum

Alastair Gordon is a critic, curator, and contributing writer to the New York Times and writes regularly for Architectural Digest, Town & Country,and Dwell. He is the author of several books including Weekend Utopia, Spaced Out, Beach Houses,and Romantic Modernist.

“The genius of NakedAirport is its portrayal of how these way stations have changed from the muddy airfields of the 1920s to their heyday in the ‘60s and beyond. . . . In charting this evolution, Gordon has written the ideal book to bring with you on a long nonstop flight.”
— Time Out New York

“This charming history documents why airports have always been such intriguing places. Gordon wittily deconstructs air terminal architecture. . . . Here is a book with more than enough quirky details to last a long layover.”
— People

“Gordon, an architecture and design critic, tells his story well, bringing to life some of the main characters and highlighting some of the important issues concerning urbanism and airports.”
— Michael Roth

“Gordon provides a truly compelling account of how airports had over the course of three-quarters of a century become the locus of not only modern dreams but postmodern nightmares as well. Don’t leave home without it.”
— Terence Riley, director of the Miami Art Museum

“Captivating and informative . . . can be warmly recommended, both for its richness of detail and Gordon’s easy command of architectural style.”

“Gordon’s engaging history tells the story of how airports have changed—from the first muddy airfields transporting people into a new world of experience (the ‘20th-century version of sublime’), through their transformation into ‘symbols of progressive thinking and utopian planning,’ and their sad decline into ‘an allegory for all that was dehumanizing in modern life.’”

"A sophisticated analysis [that will] attract many readers."

"Naked Airport is as exhilarating as it is literate and informative."

— John Berendt, author of Midnight in the Garden of Good and Evil

" Gordon's lively history [is written]  with an eclectic range of reference and an eye for detail . . . smoothly blending cultural and aesthetic history."

"Taxi-ing smoothly between architecture, planning and social history, Gordon explains how the soar-and-crash record of the airport as icon mirrors the rise and fall of technology-driven optimism."

"A richly illustrated and highly readable account of airport design as a social phenomenon."

"NakedAirport  racks up elite-status frequent-flier miles as it ranges across airports on every continent."

"Gordon's  prose is deft and witty. . . . NakedAirport  elegantly traces the development of air travel by positioning the airport as a metaphor for our relationship to history and the rest of the world, capturing both the excitement and the anxiety of modern flight."

"A fascinating and accessible survey of airport design."

"An important and engaging look at airports as typology."

"Gordon's compelling narrative shows how architecture is bound up with the rest of the world in a way that architectural histories too rarely do."

"Gordon charts the development of the airport through world war, political reorganization, technological innovation, fashion and periods of commercial boom and bust. [...He] provides the reader with an in-depth, and seemingly well researched investigation into how the airport terminal evolved such a great deal, in what is a period of still less than a century."
— Cultural Sociology