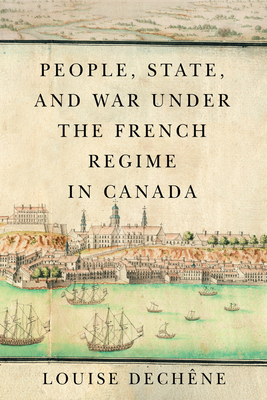 Covering a period that runs from the founding of the colony in the early seventeenth century to the conquest of 1760, People, State, and War under the French Regime in Canada is a study of colonial warriors and warfare that examines the exercise of state military power and its effects on ordinary people. Overturning the tendency to glorify the military feats of New France and exploding the rosy myth of a tax-free colonial population, Louise Dechêne challenges the stereotype of the fighting prowess and military enthusiasm of the colony’s inhabitants. She reveals the profound incidence of social divides, the hardship war created for those expected to serve, and the state’s demands on the civilian population in the form of forced labour, requisitions, and billeting of soldiers. Originally published posthumously in French, People, State, and War under the French Regime in Canada is the culmination of a lifetime of research and unparalleled knowledge of the archival record, including official correspondence, memoirs, military campaign journals, taxation records, and local parish records. Dechêne reconstructs the variegated composition and conditions of military forces in New France, which included militia, colonial volunteers, and regular troops, as well as Indigenous allies. The study offers an informed and ambitious comparison between France and other French colonies and shows that the mobilization of an unpaid, compulsory militia in New France greatly exceeded requirements in other parts of the French domain. With empathy, sensitivity to the social dimensions of life, and a piercing insight into the operations of power, Dechêne portrays the colonial condition with its rightful dose of danger and ambiguity. Her work underlines the severe toll that warfare takes on the individual and on society and the persistent deprivation, disorder, fear, and death that come with conflict.

Louise Dechêne (1928–2000) was professor in the Department of History at McGill University and author of Habitants and Merchants in Seventeenth-Century Montreal and Power and Subsistence: The Political Economy of Grain in New France. She is a recipient of the Governor General's Literary Award and twice winner of the Lionel-Groulx Prize.

"Louise Dechêne's empathic but unflinching regard for the lives of common people comes together with her Foucauldian interest in power relations in this study of warfare and wars." Leslie Choquette, Assumption University and author of Frenchmen into Peasants: Modernity and Tradition in the Peopling of French Canada

"This is the most important book on the history of New France in a long time. It significantly shifts our understanding of war and society, challenging an older historiography and leveraging themes inspired by Atlantic and comparative history to say somet