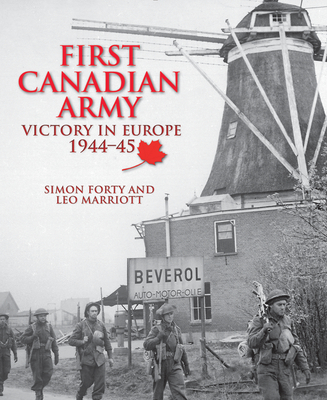 By Simon Forty, Leo Marriott
$35.00
Email or call for price.

A pictorial history of the decisive role played by Canada in the final year of World War II.

After Dunkirk, as the tattered remnants of Britain's best troops returned home without their heavy weapons, Canadian troops moved in to defend northwest Europe, sending in virtually all of its disposable weapon resources and 368,000 soldiers. The majority of these were to be part of the First Canadian Army, which would play a key role leading to the unconditional surrender by Nazi Germany on May 9, 1945.

This book is a pictorial history of the First Canadian Army in northwest Europe during the final year of the war. It concentrates not just on the events of 75 years ago but also what can be seen on the ground today. The illustrations, over 350 of them, include battle, landing and assault maps; photographs of soldiers in action and resting, aerial photographs of key sites of action then and now; battlefield survivors such as Sherman tanks; memorials to individuals and units; and, of course, the cemeteries of Canadian, Polish and British soldiers.

In ten parts and 60 chapters featuring 350 illustrations and maps, the book covers:

The Bridgehead The Battles Around Caen Clearing the Coast Clearing The Scheldt Winter on the Maas The Rhineland Advance to the Sea I Corps in The West Netherlands The German Surrender.

Military history buffs will enjoy this book for its focus on a specific battalion and its actions at a decisive moment in the war. The archival photographs are important records and reminders of this watershed moment in World War II's European theater.

Simon Forty was educated at Sedbergh School and London University's School of Slavonic and East European Studies. He specializes in military history and is the author of 40 books, notably about the First and Second World Wars, and was general editor of World War I: A Visual Encyclopedia. Forty lives in Devon, UK, with his wife and two children. Leo Marriott is an experienced pilot and photographer who lives in Somerset UK. He has published more than 50 books in military history and aviation.