On Board the Titanic: What It Was Like When the Great Liner Sank (Hardcover) 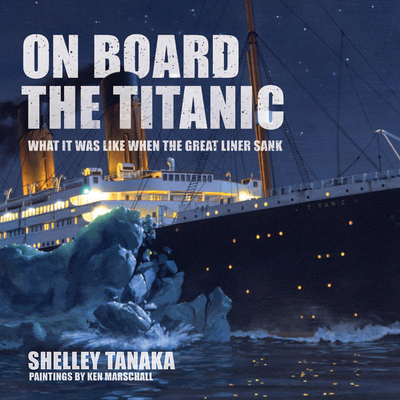 TITANIC. This is still the greatest, most recognized name in the history of ships. And it still resonates -- a great, dramatic story of pride, error and tragedy.

This is the story of the voyage of the Titanic, from embarkation to disastrous iceberg contact, sinking -- and rediscovery by Dr Robert Ballard. It is told by focusing on two real young men who sailed on the great ship: wireless operator Harold Bride, and passenger Jack Thayer, son of the wealthy Marion and John Thayer, American socialites.

How the ship sank, but Jack Thayer and Harold Bride survived, is part of the greater story of the Titanic, told here by the respected Canadian children's book author Shelley Tanaka, and with period photographs and beautiful paintings by Ken Marschall, with charts and illustrations that show the workings of the ship, the impact, and why it went down.

First published in 1997, this edition has been revised and updated to reflect new information.

Shelley Tanaka is the author of many children's non-fiction books. Ken Marschall is celebrated as the finest painter of images of the Titanic.