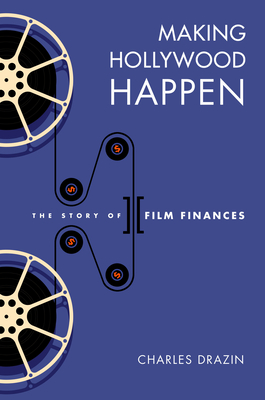 Enter Film Finances. The company was founded in London in 1950 to insure against the risk that a film would exceed its original budget or not be completed on time. Its pioneering development of the “completion guarantee”—the financial instrument that provides the essential security for investors to support independent filmmaking—ultimately led to the creation of many thousands of films, including some of the most celebrated ever made: Moulin Rouge (1953), Dr. No (1962), The Outsiders (1982), Pulp Fiction (1994), Slumdog Millionaire (2008), La La Land (2016), and more.

Film Finances’s role in filmmaking was little known outside the industry until 2012, when it opened its historical archive to scholars. Drawing on these previously private documents as well as interviews with its executives, Making Hollywood Happen tells the company’s story through seven decades of postwar cinema history and chronicles the growth of the international independent film industry. Focusing on a business that has operated at the meeting point between money and art for more than seventy years, this lavishly illustrated book goes to the heart of how the movie business works.

Charles Drazin is an archival consultant for Film Finances Ltd. He previously taught at Queen Mary, University of London, and has published several books on film history, including In Search of The Third Man, Korda: Britain’s Only Movie Mogul, and The Faber Book of French Cinema.

“Reveals a whole new facet of the history of independent film financing. Case studies of such iconic independent films as The African Queen (1951), Tom Jones (1963), Cabaret (1972), Terminator (1984), and The Crying Game (1992) are the book’s greatest strength.”—Tino Balio, author of The Foreign Film Renaissance on American Screens, 1946–1973

“Through a painstaking examination of the corporate records of Film Finances, a leading motion picture finance company, Making Hollywood Happen achieves something very few books do: retell in a highly engaging manner the well-known history of American and British film production of the past 70 years from a completely novel perspective.”—Yannis Tzioumakis, author of Acting Indie: Industry, Aesthetics and Performance