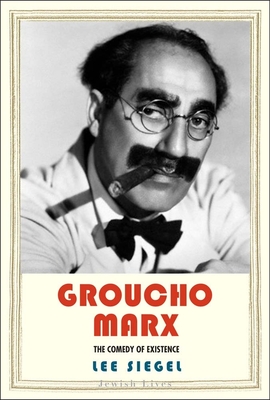 By Lee Siegel
Email or call for price

From the prizewinning Jewish Lives series, a trenchant examination of Groucho Marx and the cultural and psychological roots of his comic genius

"An astute psychological profile of the man whose biting, nihilistic comedy broke so many barriers.”—John McMurtrie, San Francisco Chronicle

"A luminous delight . . . A true page-turner and a lot of fun."—Shon Arieh-Lerer, Slate

Born Julius Marx in 1890, the brilliant comic actor who would later be known as Groucho was the most verbal of the famed comedy team, the Marx Brothers, his broad slapstick portrayals elevated by ingenious wordplay and double entendre. In his spirited biography of this beloved American iconoclast, Lee Siegel views the life of Groucho through the lens of his work on stage, screen, and television. The author uncovers the roots of the performer’s outrageous intellectual acuity and hilarious insolence toward convention and authority in Groucho’s early upbringing and Marx family dynamics.

The first critical biography of Groucho Marx to approach his work analytically, this fascinating study draws unique connections between Groucho’s comedy and his life, concentrating primarily on the brothers’ classic films as a means of understanding and appreciating Julius the man. Unlike previous uncritical and mostly reverential biographies, Siegel’s “bio-commentary” makes a distinctive contribution to the field of Groucho studies by attempting to tell the story of his life in terms of his work, and vice versa.

Jewish Lives is a prizewinning series of interpretative biography designed to explore the many facets of Jewish identity. Individual volumes illuminate the imprint of Jewish figures upon literature, religion, philosophy, politics, cultural and economic life, and the arts and sciences. Subjects are paired with authors to elicit lively, deeply informed books that explore the range and depth of the Jewish experience from antiquity to the present.

In 2014, the Jewish Book Council named Jewish Lives the winner of its Jewish Book of the Year Award, the first series ever to receive this award.

Lee Siegel, author of six books and the recipient of a National Magazine Award, has written about culture and politics for the New York Times, the Wall Street Journal, and other publications.

“Spirited and revealing. . . . An astute psychological profile of the man whose biting, nihilistic comedy broke so many barriers.”—John McMurtrie, San Francisco Chronicle

"There is no doubt that the author loves the 13 films the brothers made together, but his fascination lies with those moments when they go too far, toppling toward Samuel Beckett's 'mirthless laugh,' which laughs 'at that which is unhappy.' . . . [The book] is full of sensitive observations about Harpo's musical vocation and Groucho's uncanny greasepaint, details to propel readers back to the films. . . . You suspect Marx, frustrated doctor and unlikely pen pal of T.S. Eliot, would have appreciated being taken so seriously."—Victoria Segal, Sunday Times

"A luminous delight. . . . A true page-turner and a lot of fun. [Siegel]  applies his own philosophical acuity to the personal and socio-political aspects of Groucho’s life."—Shon Arieh-Lerer, Slate

"A scholarly milestone in the history of professional writing on Groucho Marx."—Cineaste

“Was [Groucho] serious or funny? Where did the persona stop and the real Groucho begin? Lee Seigel wrestles with these questions in his provocative and short critical biography of the man he calls the Marx Brothers’s 'central intelligence.'”—Karl Whitney, The Guardian

"A contentious but always stimulating addition to the surprisingly small library of Marx Bros studies."—Jewish Chronicle

"As Lee Siegel’s Groucho Marx: The Comedy of Existence, a book in Yale University Press’s Jewish Lives series, makes plain, Groucho was a man who could find a cloud in every silver lining."—Jewish Review of Books

“[A] forensic and well-informed analysis of the brother’s comedy through their lives . . . Siegel is good at building on finds from his extensive sources to create vivid pictures—and plausible assumptions. . . . There are plenty of unusual insights."—Jewish Renaissance

"A captivating glimpse of how Marx turned himself into a legend."—Publishers Weekly

"A valuable addition to the still-thin body of work that looks at comedy in a serious way."—The A.V. Club

"A must-read for all Groucho lovers and for all those who want to understand what Siegel states is 'the evolution of Jewish humor itself.'"—Jewish Book Council

"Siegel goes inside Groucho's early personal life in an attempt to weave those details into his public life. He does this not so much to uncover all the mysteries of the man, but to more deeply examine the nature of his comedy. . . . While we do laugh at Groucho, it is an uneasy laugh, more of uncomfortable recognition than joy. His rebellion against social structures is what makes him eternally modern and more relevant as time passes, because that rejection of the norm is the signature of progress."—A Classic Movie Blog

"A whole new perspective on one of my favorite comedians. . . . Intelligent, absorbing, analytical. . . . A fascinating new appreciation of Groucho Marx, the man and the comedian, and what really lurked behind the mustache, eyebrows, glasses and cigar."—Stuart Nulman, The Montreal Times

"The moral ambiguity Siegel finds in the Marx Brothers’ films never occurred to me before reading his book. . . . Siegel makes many valid and interesting points. His greatest success was in changing my view of both the films and Groucho’s life."—Rabbi Rachel Esserman, The Reporter Group

"[The Marx Brothers] grew up hardscrabble and gifted in immigrant Upper East Side New York. The consequences are illuminated interestingly by Lee Siegel. . . . 'Just because Groucho wanted merely to entertain doesn’t mean that he didn’t come up with something that went beyond entertainment,' argues Siegel. 'He fulfilled Jewish humor’s quintessential tendency. He made it philosophical.' It's laughter with a razor's edge; en garde, everybody."—The Virginian Pilot

"Fast and stimulating. . . . A rarity in Marx criticism."—Allen Barra, Truthdig.com

"A work with depth and originality as [Siegel] builds a psychoanalytic, philosophical thesis about the unextractable part played by the Marx Brothers’ own lives in their comedy. . . . A very readable, engaging, and worthy new entry in the rather sizable world of Marx Brothers scholarship."—Frank Beaver, Michigan Today

“A beautiful, brilliant, and persuasive reading of Marx as crypto-nihilist. A necessary and pulse-quickening work (utterly bereft of jargon or self-seriousness), linking Aristophanes to Kafka to Beckett to Groucho to Woody Allen to Amy Schumer.”—David Shields, author of Reality Hunger

“Lee Siegel’s brilliant analysis of the glorious, scary, beyond-funny humor of Groucho and his brothers made me feel as if I were watching their movies for the first time. In this hugely enjoyable and stimulating book, Siegel shows how Groucho became an impossibility: an immortal comedian.”—Ian Frazier, author of Great Plains and On the Rez