Free the Beaches: The Story of Ned Coll and the Battle for America’s Most Exclusive Shoreline (Hardcover) 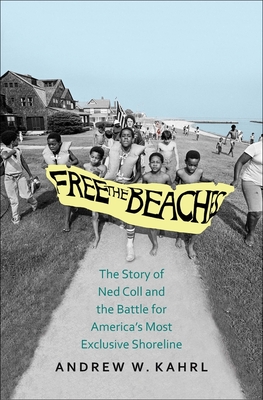 The story of our separate and unequal America in the making, and one man’s fight against it

During the long, hot summers of the late 1960s and 1970s, one man began a campaign to open some of America’s most exclusive beaches to minorities and the urban poor. That man was anti-poverty activist and one‑time presidential candidate Ned Coll of Connecticut, a state that permitted public access to a mere seven miles of its 253‑mile shoreline. Nearly all of the state’s coast was held privately, for the most part by white, wealthy residents.

This book is the first to tell the story of the controversial protester who gathered a band of determined African American mothers and children and challenged the racist, exclusionary tactics of homeowners in a state synonymous with liberalism. Coll’s legacy of remarkable successes—and failures—illuminates how our nation’s fragile coasts have not only become more exclusive in subsequent decades but also have suffered greater environmental destruction and erosion as a result of that private ownership.

Andrew W. Kahrl is associate professor of history and African American studies at the University of Virginia. His first book, The Land Was Ours, received the Liberty Legacy Foundation Award from the Organization of American Historians.

“Engrossing . . . An important addition to the literature on 20th-century racism in the North.”—Library Journal

“The successes and failures of the activists give us plenty of lessons today.”—Connecticut Magazine

“Essential reading for anyone interested in the state’s history of race relations.”—The Sunday Republican

“Kahrl . . . tells this story of popular resistance to inequality with authority and verve.”—The National Book Review

“Essential reading for historians interested in income and racial inequality, land use, and the relationship between law and social movements.”—Law and History Review

“Halfway between novelistic biography and scholarly tome, Free the Beaches is compelling in its form. . . . A gripping story. . . . Kahrl’s tour de force resides in his capacity to elevate this seemingly regional controversy to a conflict of national importance.”—Elsa Devienne, Planning Perspectives

Winner of the Homer D. Babbidge Award, sponsored by the Association for the Study of Connecticut History

Winner of the  2019 Connecticut Book Awards, non-fiction category, sponsored by Connecticut Center for the Book

“This impressively researched, eloquently written, and artfully constructed book is very important reading for anyone interested in understanding the roots of inequality in the northeast and the nation.”—Lily Geismer, author of Don’t Blame Us: Suburban Liberals and the Transformation of the Democratic Party

"An illuminating and damning account of power and privilege in late twentieth-century America."—Colin Fisher, author of Urban Green: Nature, Recreation, and the Working Class in Industrial Chicago

“This is a life story brimming with humanity and a great antidote to life under global capitalism, in which privatization is all the rage. Andrew Kahrl’s book is sure to have a sorely needed humanizing effect on all its readers.”—Ted Steinberg, author of Gotham Unbound: The Ecological History of Greater New York

“In Free the Beaches, Andrew Kahrl not only tells the remarkable story of activist Ned Coll. He also shows that on the Connecticut shore, white liberalism and racial exclusion went hand in hand.”—Jason Sokol, author of All Eyes Are Upon Us: Race and Politics from Boston to Brooklyn

“What would it mean to broaden our view of the most important fights against segregation from a Montgomery bus to the Connecticut shore? Andrew Kahrl powerfully shows us and it's sobering: the extent Northern white families went to preserve their segregated spaces and the long fight by black and white activists like Ned Coll and Revitalization Corps to open them.”—Jeanne Theoharis, author of A More Beautiful and Terrible History: The Uses and Misuses of Civil Rights History