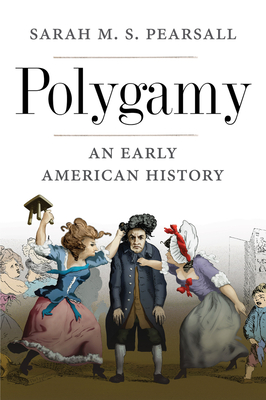 "A richly sourced, elegantly written, and strikingly original interdisciplinary study of the diverse practices of polygamy in American from ca.1500 to 1900.”—John Witte Jr., Journal of Law and Religion

Today we tend to think of polygamy as an unnatural marital arrangement characteristic of fringe sects or uncivilized peoples. Historian Sarah Pearsall shows us that polygamy’s surprising history encompasses numerous colonies, indigenous communities, and segments of the American nation. Polygamy—as well as the fight against it—illuminates many touchstones of American history: the Pueblo Revolt and other uprisings against the Spanish; Catholic missions in New France; New England settlements and King Philip’s War; the entrenchment of African slavery in the Chesapeake; the Atlantic Enlightenment; the American Revolution; missions and settlement in the West; and the rise of Mormonism.

Pearsall expertly opens up broader questions about monogamy’s emergence as the only marital option, tracing the impact of colonial events on property, theology, feminism, imperialism, and the regulation of sexuality. She shows that heterosexual monogamy was never the only model of marriage in North America.

Sarah M. S. Pearsall teaches the history of early America and the Atlantic world at the University of Cambridge. She is the author of the prizewinning Atlantic Families: Lives and Letters in the Eighteenth Century.

“Cambridge historian Sarah Pearsall has produced a richly sourced, elegantly written, and strikingly original interdisciplinary study of the diverse practices of polygamy in American from ca.1500 to 1900.”—John Witte Jr., Journal of Law and Religion

"Pearsall’s narrative is expansive and stretches over two hundred years. . . . This long view does not allow the author to concentrate on a central cast of characters largely because it cannot. American polygamy was too ubiquitous and amorphous for this to be possible. This is not a shortcoming of the book, however, but a strength, because it allows Pearsall to paint a broader, more dynamic picture of American polygamy."—Christopher M. Gleason, Journal of the History of Sexuality

“This is an important study, one that is carefully crafted, deeply researched, and written in engaging, accessible prose. . . . This book is essential reading for those in our own times who assume that monogamy is inevitably progressive, and polygamy is inevitably regressive.”—Sarah Carter, Journal of Arizona History

“Polygamy does a remarkable job of displacing the construction of monogamy as universal in the Atlantic world. Moreover, Pearsall underscores the active participation and consent of women who entered plural marriages.”—Sandra Slater, Journal of Southern History

“A richly sourced, elegantly written, and strikingly original interdisciplinary study of the diverse practices of polygamy in America from ca. 1500 to 1900. . . . [A] brilliant new book.”—John Witte, Jr., Journal of Law and Religion

“As the first book on the topic, Sarah M. S. Pearsall’s book provides fresh insight into the complex history of early modern American polygamy, dispelling the myth that it began with the Mormons.”—Christopher M. Gleason, Journal of the History of Sexuality

“Sarah Pearsall’s work is stunningly original, riveting, shocking.  If anyone still thinks of early modern polygamy as a thread that ran intermittently along the fringes of the Reformation, they have another think coming: African, Native American, Catholic, and, finally, Mormon marital practices upend comforting platitudes about ‘traditional’ marriage in early America.”—Sarah Barringer Gordon, University of Pennsylvania

"By taking polygamy seriously, Sarah Pearsall illuminates the long, tangled history of marriages across four centuries and many cultures in North America.  We see diverse American families in fresh and provocative ways thanks to Pearsall's wide-ranging research and vivid prose."—Alan Taylor, author of American Revolutions: A Continental History, 1750-1804

“An innovative and thought-provoking book. Sarah Pearsall uses polygamy as a point of entry to the broader world of marriage and the gender roles that attended to it, making a strong argument that such matters were intertwined with the expression of power at all levels in early America.”—Christopher Hodson, Brigham Young University