Queen Hereafter: A Novel of Margaret of Scotland (Paperback) 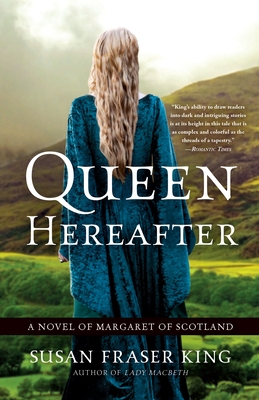 Refugee. Queen. Saint. Based on the lives of Saint Margaret of Scotland and her husband, King Malcolm III, in eleventh-century Scotland, a young woman strives to fulfill her destiny despite the risks...

Shipwrecked on the Scottish coast, a young Saxon princess and her family—including the outlawed Edgar of England—ask sanctuary of the warrior-king Malcolm Canmore, who shrewdly sees the political advantage. He promises to aid Edgar and the Saxon cause in return for the hand of Edgar’s sister, Margaret, in marriage.

A foreign queen in a strange land, Margaret adapts to life among the barbarian Scots, bears princes, and shapes the fierce warrior Malcolm into a sophisticated ruler. Yet even as the king and queen build a passionate and tempestuous partnership, the Scots distrust her. When her husband brings Eva, a Celtic bard, to court as a hostage for the good behavior of the formidable Lady Macbeth, Margaret expects trouble. Instead, an unlikely friendship grows between the queen and her bard, though one has a wild Celtic nature and the other follows the demanding path of obligation.

Torn between old and new loyalties, Eva is bound by a vow to betray the king and his Saxon queen. Soon imprisoned and charged with witchcraft and treason, Eva learns that Queen Margaret—counseled by the furious king and his powerful priests—will decide her fate and that of her kinswoman Lady Macbeth. But can the proud queen forgive such deep treachery?

Impeccably researched, a dramatic page-turner, Queen Hereafter is an unforgettable story of shifting alliances and the tension between fear and trust as a young woman finds her way in a dangerous world.

With graduate degrees in art and art history, former college lecturer SUSAN FRASER KING is the author of several bestselling novels praised for lyrical style and historical accuracy. Raised in upstate New York and a frequent visitor to Scotland, she lives in Maryland with her family.

“King is adept at pulling the reader into uncharted historical territory and making it real.  A story of love, women’s friendship, and suspense—this epic tale and its larger-than-life characters linger in the mind and heart.” —Karen Harper, author of Mistress Shakespeare

“A captivating tale of the devout girl forced by fate to become queen to a passionate king.  As successor to Lady Macbeth and the most powerful woman in Scotland, Margaret earns love, hate—and lasting friendships. Susan Fraser King carries her readers through the Scots courts as if she’d lived there herself.” —Patricia Rice, New York Times bestselling author of The Wicked Wyckerly

“Through a combination of assured scholarship and powerful storytelling, Susan Fraser King brings alive the complex, vivid world of Margaret of Scotland. With vibrant characters and lyrical description, this is a wonderful evocation of eleventh-century Britain in all its fierce splendor.” —Nicola Cornick, USA Today bestselling author

“She: a pious, educated foreigner; he: a hirsute warrior king—yoked together in matrimony for political expedience. Based on actual events, Susan Fraser King paints a vivid portrait of Margaret and Malcolm, a forced royal marriage that beat all odds and developed into one of mutual love and respect.” —Leslie Carroll, author of Notorious Royal Marriages

“Susan Fraser King’s books, Lady Macbeth and now Queen Hereafter, are such delights—she lets us explore where normally we historians are not permitted to go. And what a wonderful pleasure that is, for she brings the scholar’s eye for authentic detail and evokes all the smoky atmosphere of medieval Scotland. Oh, I am jealous—and grateful.” —John C. Hartsock, professor of literary journalism and author of Seasons of a Finger Lakes Winery

“Susan Fraser King’s Queen Hereafter transports the reader back to through the mists of Celtic history to the people behind the legends. In this story, as in the historical reality, love and romance jostle side by side with political manipulation and the horrors of war.  Ms. King presents a human Queen Margaret of Scotland and places her believably in a world known to us only through brief anecdotes in ancient manuscripts. Based on her extensive research, the author takes us back to early Scotland with its royal court, habitués, and their schemes.” —Ben Hudson, Ph.D., professor of Celtic and medieval studies, Penn State