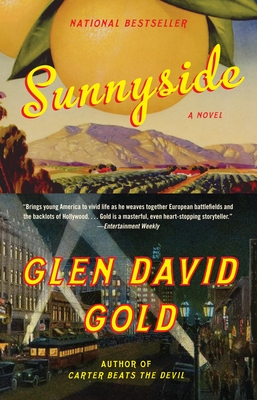 A quintessentially American epic, Sunnyside stars the one and only Little Tramp, Charlie Chaplin.  It’s 1916 and, after an extraordinary mass delusion where Chaplin is spotted in more than eight hundred places simultaneously, his fame is at its peak but his inspiration is at a low.  As he struggles to find a film project as worthy as himself, we are introduced to a dazzling cast of characters that take us from the battlefields of France to the Russian Revolution and from the budding glamour of Hollywood to madcap Wild West shows.  The result is a spellbinding novel about dreams, ambition, and the birth of modern America.

Glen David Gold’s first novel, Carter Beats the Devil, has been translated into fourteen languages. His short stories and essays have appeared in McSweeney’s, Playboy, and The New York Times Magazine. He lives in San Francisco with his wife, Alice Sebold.

“Brilliant . . . Sunnyside offers a wealth of wit and pathos and insight, and who better to guide us through this transformational moment in history than the Little Tramp? . . . Gold’s dexterous voice can swing from the exuberant melodrama of silent film to the terror of doomed soldiers to the quiet despair of the world’s most beloved man.” —Washington Post

“Sunnyside always intrigues and often soars . . . [It has] wonderful Dickensian qualities, namely, the capacity to startle, to thrill, to evoke laughter and, ultimately, to bring tears to the eyes.” —Los Angeles Times Book Review

“Ingenious. . . . A thoughtful commentary on the creation of celebrity in modern America.” —The New Yorker

“Glen David Gold’s Doctorow-esque Sunnyside brings young America to vivid life as he weaves together European battlefields and the backlots of Hollywood . . . Gold is a masterful, even heart-stopping storyteller.” —Entertainment Weekly

“An insanely ambitious novel . . . Gold’s prose is both decorative and tensile, like art deco steel turned into English language . . . [One] scene is such a gorgeous evocation of movieland glamour, night air and heartache that it calls to mind the finest of Hollywood novels, F. Scott Fitzgerald’s The Last Tycoon.” —Aravind Adiga, Financial Times

“A rich concoction of a novel, a melange of historical fact, biographical speculation and outright fantasy . . . Sunnyside pops and crackles with cleverness.” —San Francisco Chronicle

“Sunnyside moves in grand arcs. . . . Like all the best historical novels, this one is as much about the present as anything else.” —ComicCritique.com

“Gold’s Chaplin will fascinate readers for any number of reasons. . . . With protean, smart, and appropriately Chaplinesque writing.” —The New York Times Book Review

“Sunnyside is the best kind of summer reading, a beautifully lavish, intelligent novel that begs to be read slowly and closely, from first line to last. . . . Warmhearted and enveloping.” —Portland Mercury

“Sunnyside is a big book crammed with big ideas and ambitions, and, with its multiple plots and mix of history and fiction, it’s easy to see why many reviews have compared it to the work of E.L. Doctorow . . . [It’s] full of intelligence, ambition, and generosity.” —Christian Science Monitor

“A historical novel full of comedic pleasures. . . . [It] has a rampant sense of fun.” —Arizona Republic

“Witty and often as funny as it is insightful. . . . Sunnyside plays out much like Chaplin’s career, initially funny but moving on to something that is deeper, that plumbs the human condition without necessarily providing definitive answers . . . Grandly imagined.” —Denver Post

“A gloriously enjoyable read, with pleasures on almost every page: a novel of which Chaplin, the supreme entertainer, would have been proud.” —Daily Telegraph (London)

“Sunnyside is a cane-twirling, bowler-doffing triumph.” —Independent on Sunday (London)

“Sunnyside is a riot, as Gold displays a prodigious gift for storytelling, with a succession of scintillating set pieces and audacious one-liners . . . Fantastic.” —Time Out London

“A breathless stupendous novel that recreates both a young brash America on the verge of becoming itself, and Chaplin, one of its most bewitching quixotic citizens. From lighthouse to Hollywood to starlets to war to stardom to madness to genius Gold’s startling narrative carries us across the world and back. Gold proves himself yet again to be the hungriest craftiest funniest and most humane novelist we have.” —Junot Díaz