This Time Together: Laughter and Reflection (Paperback) 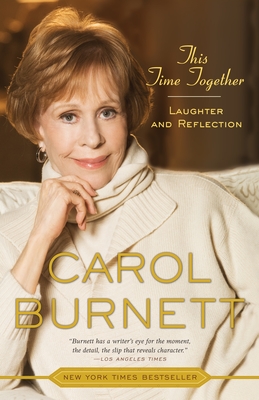 This touching and hilarious memoir is 100 percent Carol Burnett—funny, irreverent, and irresistible.

Carol Burnett is one of the most beloved and revered actresses and performers in America. The Carol Burnett Show was seen each week by millions of adoring fans and won twenty-five Emmys in its remarkable eleven-year run. Now, in This Time Together, Carol really lets her hair down and tells one funny or touching or memorable story after another.

In engaging anecdotes, Carol discusses her remarkable friendships with stars such as Jimmy Stewart, Lucille Ball, Cary Grant, and Julie Andrews; the background behind famous scenes, like the moment she swept down the stairs in her curtain-rod dress in the legendary “Went with the Wind” skit; and things that would happen only to Carol—the prank with Julie Andrews that went wrong in front of the First Lady; the famous Tarzan Yell that saved her during a mugging; and the time she faked a wooden leg to get served in a famous ice cream emporium.

This poignant look back allows us to cry with the actress during her sorrows, rejoice in her successes, and finally, always, to laugh.

Carol Burnett has been an actor on Broadway, on television, and in the movies. She has been awarded the Presidential Medal of Freedom, The Mark Twain Prize for Humor and the Kennedy Center Honors, among other singular achievements of a woman comedian who was nothing less than a pioneer and a role model for stars like Tina Fey, Amy Pohler and Amy Schumer.

"These short memories, of the people Burnett met and interviewed over the years, on- and off-camera, bring it back — the golden age of variety shows....Burnett has a writer's eye for the moment, the detail, the slip that reveals character. She's never mean and always grateful."
—Los Angeles Times

"Carol was a huge star on television because she was funny, daring, and always genuine.  We loved Carol because we felt we knew her. With this book, we do.  She trusts us with her personal anecdotes, happy, sad, hilarious and poignant. Thank you Carol. "
—Billy Crystal

"I read This Time Together in one sitting and when I finished I felt like Carol had been sitting beside me telling me these wonderful stories of her life. It's funny, it's endearing and very moving. I cannot recommend it highly enough."
—Julie Andrews

"I grew up watching Carol Burnett. She's an amazing actress, talented writer and legendary comedienne.  She inspired me to do what I'm doing today. And believe me, if I knew how to read, I would definitely read this book."
—Ellen DeGeneres

" I love this book because it's written the way she talks--nothing stilted, nothing distanced. You'll read it in one gulp (I did) and then you'll read it again. She's an excellent writer--so spot-on intelligent and hilarious.
—Hal Prince

"Reading Carol Burnett's book, This Time Together, makes me realize that every American family prays that they can have someone as lovely as Carol as their next door neighbor."
—Tony Bennett