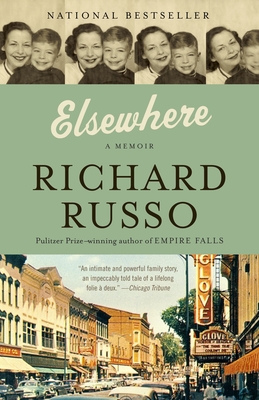 By Richard Russo
Email or call for price

“This is a heartfelt and intimate portrait of Russo's relationship with his troubled mother and his coming to terms with what he could -- or could not -- have done differently, starting when he was a young boy and his parent's marriage failed. In the late 1960s anxiety, depression, and obsessive compulsive disorder were not often diagnosed or treated, and effective coping strategies were not taught to families. Russo struggled with how to balance his mother's needs with his own concerns -- his wife and daughters and his teaching and writing. Insightful and painful in turns, this is a real life tale from one of our best storytellers.”
— Liza Bernard, Norwich Bookstore, Norwich, VT

A Pulitzer Prize-winning novelist turns to memoir in this "intimate and powerful" account (Chicago Tribune) of his lifelong bond with his high-strung, spirited mother—and the small town she spent her life trying to escape.

Anyone familiar with Russo’s novels will recognize Gloversville—once famous for producing nine out of ten dress gloves in the United States. By the time Rick was born, ladies had stopped wearing gloves and Gloversville was on its way out. Jean Russo instilled in her son her dream of a better life elsewhere, a dream that prompted her to follow him across the country when he went to college. Their adventures and tribulations on that road trip were a preview of the hold his mother would continue to have on him as she kept trying desperately to change her life. Recounted with a clear-eyed mix of regret, nostalgia, and love, Elsewhere is a stirring tribute to the tenacious grip of the past.

RICHARD RUSSO is the author of eight novels; two collections of stories; and Elsewhere, a memoir. In 2002 he received the Pulitzer Prize for Empire Falls, which like Nobody’s Fool was adapted to film, in a multiple-award-winning HBO miniseries.

“One of the most honest, moving American memoirs in years. . . . Russo’s intellectual and emotional honesty are remarkable.” —NPR Books

“Russo conjures the incredible bond between single mother and only child in a way that makes his story particularly powerful.” —The Daily Beast

“Redemption is always the prize in a Russo story. Nowhere do we see that more clearly than in Elsewhere, a brave little book in which a writer spins deprivation into advantage, suffering into wisdom, and a broken mother into a muse.” —The Washington Post

“Vivid . . . devastating. . . . Russo brings the remarkable compassion he’s known for in his fiction to this account.” —The Christian Science Monitor

“Russo is the Bruce Springsteen of novelists. . . . In a paragraph or even a phrase, he can summon up a whole world.” —Maureen Corrigan, Fresh Air

“Filled with insights, by turn tender and tough, about human fidelity, frailty, forbearance, and fortitude.” —The Philadelphia Inquirer

“Exquisite. . . . Elsewhere is a memoir and a bravura essay, a meditation on negotiating flaws.” —The Miami Herald

“Richard Russo has mined his childhood with enormous energy, humor and craftsmanship. . . . Readers discovering Russo through this memoir and then returning to his first few titles are embarking on a delightful voyage with a gifted writer about whom they now know a great deal.” —The Seattle Times

“A real-life mystery about his mother’s demons. . . . Russo writes without bitterness, but with the kind of clear-eyed compassion he bestows on his fictional characters.” —USA Today

“Rich and layered. . . . Russo’s memoir is an honest book about a universal subject: those familial bonds that only get trickier with time.” —Minneapolis Star Tribune