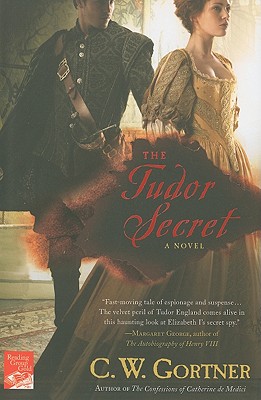 The era of the Tudors was one of danger, intrigue, conspiracy, and, above all, spies.

Summer 1553: A time of danger and deceit. Brendan Prescott, an orphan, is reared in the household of the powerful Dudley family. Brought to court, Prescott finds himself sent on an illicit mission to the king's brilliant but enigmatic sister, Princess Elizabeth. But Brendan is soon compelled to work as a double agent by Elizabeth's protector, William Cecil, who promises in exchange to help him unravel the secret of his own mysterious past.

A dark plot swirls around Elizabeth's quest to unravel the truth about the ominous disappearance of her seriously ill brother, King Edward VI. With only a bold stable boy and an audacious lady-in-waiting at his side, Brendan plunges into a ruthless gambit of half-truths, lies, and murder. Filled with the intrigue and pageantry of Tudor England, "The Tudor Secret "is the first book in The Elizabeth I Spymaster Chronicles.

C. W. Gortner is the author of the acclaimed historical novels "The Last Queen" and "The Confessions of Catherine de Medici." He holds an MFA in writing with an emphasis on Renaissance studies from the New College of California. In his extensive travels to research his books, he has danced a galliard in a Tudor great hall and experienced life in a Spanish castle. He is also a dedicated advocate for animal rights and environmental issues. Half Spanish by birth, he lives in Northern California.

“Riveting . . . In Gortner’s capable hands, Prescott is a believable and enjoyable hero, a man of strong loyalties but naïve enough to be exploited. And while the Dudleys are mostly broadly drawn villains, Robert has depth, and though readers familiar with the Tudor era will know the key players, they may be surprised by their depiction here. Gortner handles action with aplomb, adding a riveting, fast-paced thriller to the crowded genre of Tudor fiction.”—Publishers Weekly on The Tudor Secret

“Even Tudor fans who know all the key players and historical backdrop will be captivated by Gortner’s storytelling and his engaging hero. He juxtaposes his naïve and loyal hero with the cruel Robert Dudley, enhancing the plot and grabbing reader interest as much as the quick pace and lush historical references. The novel is both entertaining and thoughtful.”—RT Book Review on The Tudor Secret

“Dazzling cast of characters . . . at its heart, the brilliant and enigmatic Elizabeth. Never have spy and counterspy been more challenged, villains more duplicitous, and life for those in power—or hoping to be—more dangerous. . . . Fast-moving tale of espionage and suspense . . . The velvet peril of Tudor England comes alive in this haunting look at Elizabeth I’s secret spy.”—Margaret George, New York Times bestselling author of The Autobiography of Henry VIII on The Tudor Secret

“An intriguing and provocative book about one of history’s most controversial queens and the turbulent world of sixteenth-century France.”––Sharon Kay Penman, New York Times bestselling author of Devil’s Brood on The Confessions of Catherine de Medici

“A dramatic, epic novel . . . Meticulously researched, this engrossing novel offers a fresh portrait of a queen who has too often been portrayed as a villain.”––Sandra Gulland, bestselling author of The Josephine B. Trilogy, on The Confessions of Catherine de Medici

“A can’t-put-it-down novel. . . . Gortner is a brilliant new star in historical fiction!”—Robin Maxwell, author of The Secret Diary of Anne Boleyn, on The Last Queen

“Meticulously researched . . . Gortner breathes life into his queen.”—Library Journal on The Confessions of Catherine de Medici