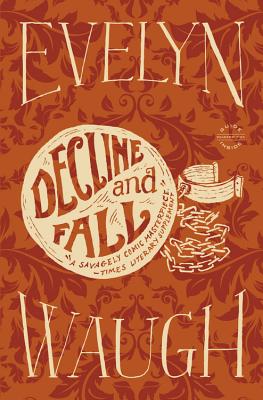 Sent down from Oxford after a wild, drunken party, Paul Pennyfeather is oddly surprised to find himself qualifying for the position of schoolmaster at a boys' private school in Wales. His colleagues are an assortment of misfits, rascals and fools, including Prendy (plagued by doubts) and Captain Grimes, who is always in the soup (or just plain drunk). Then Sports Day arrives, and with it the delectable Margot Beste-Chetwynde, floating on a scented breeze. As the farce unfolds in Evelyn Waugh's dazzling debut as a novelist, the young run riot and no one is safe, least of all Paul.

Evelyn Waugh (1903-1966), whom Time called "one of the century's great masters of English prose," wrote several widely acclaimed novels as well as volumes of biography, memoir, travel writing, and journalism. Three of his novels, A Handful of Dust, Scoop, and Brideshead Revisited, were selected by the Modern Library as among the 100 best novels of the twentieth century.

"A world of anarchic fantasy, floodlit with a bland, devastating brilliance....Waugh's people were of two classes, both of whom he knew intimately: the giddy rich and adventurers of vast caddishness....The characters reeled their lunatic way, with sublime insouciance or sublime rascality, through a harlequinade ending in gruesome but hilarious calamity."—Charles J. Rolo, Atlantic Monthly

"Decline and Fall is that all-too-rare phenomenon, a good nonsense novel. Its author has had the happy inspiration to take nothing seriously, and least of all himself. The result is a book which makes more sense than most."—T.S. Matthews, The New Republic

"Surely one of the finest satirical novels of our time, in whcih uplift, religion, romance, and personal animus do not dissipate the satiric intention."—Ernest Jones, The Nation